Florida couple and their primate 'monkid' 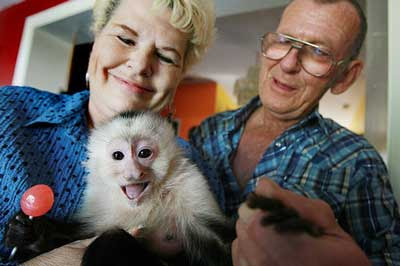 Lori Johnson was lonely and depressed after her youngest son left home in 1992. She yearned for another child to love. So Johnson bought a baby monkey.

"She was a little, bitty, teeny thing staring up at me," said Johnson, 58, who lives in Deltona with her husband and Jessica Marie, a 5-pound capuchin she calls her daughter. "She was enough to steal anyone's heart, she was."Like Johnson, there is a growing group of monkey lovers who pay big bucks to diaper and dote on their primates. Some even raise them as surrogate children.

Many self-described "monkey people" don't dare call them pets. They are playfully referred to as "monkids" and reared in a world of pierced ears, monogrammed clothes, a seat at the dinner table and their own bedrooms. There's a photo gallery here.
.
Posted by The Man at 11:25 AM No comments: 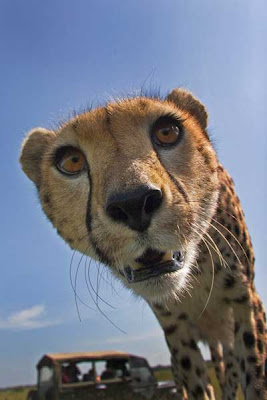 YA GOTTA WATCH THIS!

IT'S THE #1 SONG PLAYED ALL OVER THE COUNTRY

Globalization - Information Age
Posted by The Man at 11:05 AM No comments: 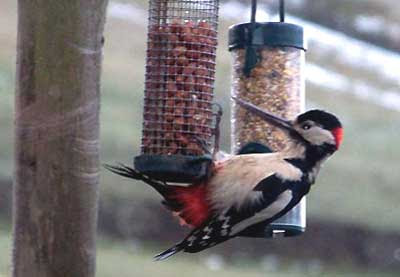 A beak that is more than twice the normal size has taken a North Yorkshire woodpecker to the top of the pecking order.
Ornithologists said they were surprised the great spotted woodpecker could fly, let alone feed, because of the size of its bill.
The woodpecker was seen by Janet and Bob Morton in the garden of their home near Pickering. They named him Woody, after the cartoon character.
"We just couldn't believe how big his beak was," 62-year-old Bob Morton told the Daily Mail.
"Woody comes by every day now - you can't miss him. We first noticed the beak at Christmas when he arrived with a female and a baby."
Tony Richardson, of the RSPB, said the woodpecker had a "serious beak deformity".
"It's probably 120% bigger than it should be," he said. "A beak grows much like hair and nails on a human, but natural wear and tear should keep it in check.
"Many birds wouldn't be able to survive with this handicap - but luckily woodpeckers have enormous tongues, so this one is still able to gather food."
Woodpeckers use their beaks to chisel away bark to get at grubs or hollow out old wood to make a nest hole.
Their tongues are at least three times the length of their bills.