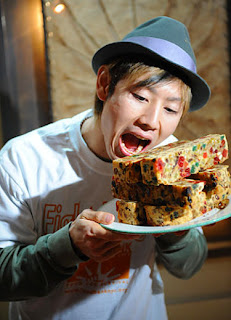 Takeru Kobayashi tried to break world fruitcake eating championship
Friday but bit off more than he could chew.
.

Water Garden In The Dark Woman Finds $10G in Box of Crackers
Debra Rogoff of Irvine, California bought a box of Crackerjacks from the grocery store had some crackerjack in it — an envelope stuffed with $10,000.
Yet the Irvine woman was more curious than ecstatic about her daughter's find. After all, who would leave money in such a place?
"We just thought, 'This is someone's money,"' she said. "We would never feel good about spending it."
Rather than go on a shopping spree, the family called police and was initially told the money could be part of a drug drop.
Police later heard from store managers at Whole Foods in Tustin that an elderly woman had come in a few days earlier, hysterical because she had mistakenly returned a box of crackers with her life savings inside. In a mix-up the store restocked the box rather than composting it.
The Lake Forest woman, whose identity was not released, had lost faith in her bank and decided the box would be a safer place for the money.
Luckily for her, the box of Annie's Sour Cream and Onion Cheddar Bunny crackers were bought by the Rogoffs, who discovered the crisp $100 bills in an unmarked white envelope on Oct. 10.
The Rogoffs never heard from the woman and didn't receive a reward.
.
Troopers use classic TV getaway car to nab speeders
The Dodge Charger -- the same Detroit muscle car the Dukes of Hazzard used to get away from the law -- is now in the hands of the colleagues of Sheriff Roscoe P. Coltrane
The Florida Highway Patrol's got 50 of 'em -- unmarked -- ready to sneak up on the unsuspectin'.
Their ride is silver with dark tinted windows and blue-and-red lights cleverly concealed around the window edges.
"Gets 22 miles to the gallon,'' says State Trooper John Sessa. "This car's got 350-360 horsepower. Zero to 100 in a half-mile."
So, like any good Duke boy, does he have to climb into his Charger through the window?
"No, I use the door handles like a normal car," he said.
What about a bright paint job with maybe a Florida state flag on the roof?
"I don't think the Patrol will let us do that."
In this real-life drama, the dukes don't get away when they hear sirens and step on the gas.
Sessa gets to say one of his favorite lines -- "I need to see your license, registration, and proof of insurance, please" -- twice in just twenty minutes.
Them bad guys are in a heap o' trouble!
.
'Robber' reports bank heist
Forget calling an 800 number for customer service. One Bolingbrook man simply dialed 911.
Police say John A. Pighee Jr., 58, of 610 Preston Drive was unhappy with the service he received at a Bank of America branch.
So, shortly before noon Monday, he picked up his cell phone, called police and reported a robbery at the bank, 111 Lily Cache Lane, while he was there.
"As odd as it sounds, we took a bank robbery (call) from the bank robber," Lt. Ken Teppel said.
Teppel said the man had attempted withdrawing some money that the bank had a hold on. When the bank wouldn't release the funds, "he stated he was going to shut the bank down."
"He picked up his cell phone, called 911 and reported that the bank was being robbed," Teppel said. "He never relayed to the employees he was going to rob the bank, and he never showed a weapon."
After about 15 to 20 minutes of talking by phone with the branch's employees from the parking lot, police determined the bank was not, in fact, being robbed. They promptly entered the building and arrested Pighee.
He was charged with felony disorderly conduct, Teppel said.
"It was one of the most unusual calls we have received," he said
.
Posted by The Man at 2:35 PM No comments: