Backwards Feet
A Chinese waitress has refused a disability pension - despite being born with feet facing the wrong way. Chongqing resident Wang Fang, 27, says she has learned to live a normal life despite her condition, and refuses to be classed as disabled as she is capable of doing her job. 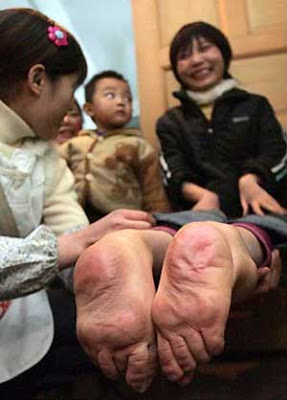 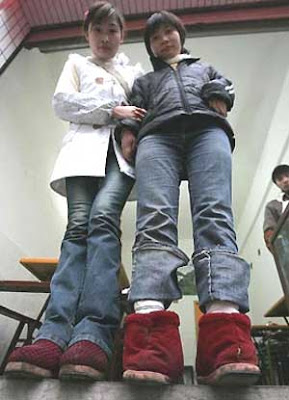 She said: "I can run faster than most of my friends and have a regular job as a waitress in the family restaurant." Despite her unusual development, she insists that "there is no reason to class me as disabled." At Wang Fang's birth, doctors were concerned that she would be unable to walk normally, but her family agree that she can not only walk perfectly well, she can in fact out-run most of them. She said: "I can walk as well as anyone else, and even run faster than them. I'm like everyone else - except of course that I put my shoes on backwards."
.
.
.
Six-Pawed Puppy
This is Octopus, so-called because he was born with six paws, two more than the average pooch. He was due to be destroyed until vets rescued him in Hong Kong (China). 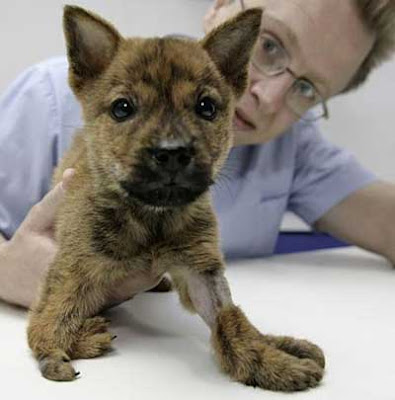 The six-week-old tiger-striped mongrel was born with a rare deformity in which the two bones of his forelegs have grown apart. As a result, a separate paw has grown on the end of each bone, giving him four front paws. Australian vet Stephan Lehner plans to operate on Octopus. He has been consulting overseas experts to determine the best way forward. 'I have only ever seen anything like this two or three times in 15 years as a vet,' he said. X-rays indicate the dog's right front leg may have to be amputated because it is so badly deformed.
Posted by The Man at 11:08 AM