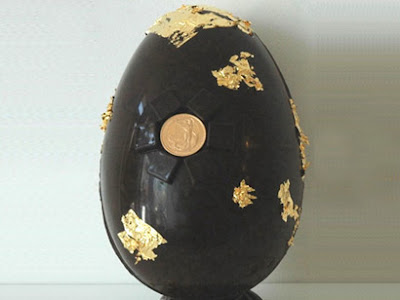 A British department store is urging shoppers to stock up on its UK£ 1000 = $1,464.6 U.S. dollars Easter eggs - as an investment.
Selfridges hopes customers will be tempted to shell out for the eggs, which contain a gold coin, reports Sky News.
The retailer says the confectionary, which is handmade by Melt, "makes for a wise investment".
The one troy ounce gold coin is worth almost £900, 75% higher than in 2005, and forecasters expect the value to rise even further.
Ewan Venters, director of food and drink at Selfridges, said: "Don't invest in the stock market this Easter, invest in the golden egg instead.
"It really is worth its weight in gold - even after the fantastic chocolate has been eaten."
A Selfridges spokesman added: "According to the financial institution Swiss bank UBS, demand for gold will double this year compared to 2007, as investors see the precious metal as a safe haven during the current volatile economic climate."
.
Posted by The Man at 1:14 PM