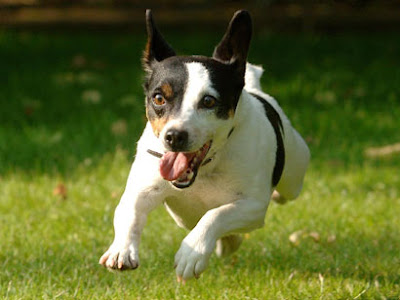 A Jack Russell who was stuck in a rabbit hole for 25 days managed to crawl out after losing weight.
Jake lost 2kg after he disappeared during a walk.
Owner Jill Thomas, 52, from Haverfordwest, West Wales said she had given up hope of finding him alive.
She told The Sun: "We looked everywhere. But once three weeks had gone by we gave up hope."
After Jake managed to get free he made his way to a farm where children recognised him from 'missing' posters.
He was rushed to the vet who put him on a drip.
Jill's husband Rick added: "Jake was skin and bone. It was touch-and-go for a while. But he's a fit little dog and he slowly recovered."
Jill added: "We're so glad he's home. It's incredible he survived."
.
Posted by The Man at 5:49 PM