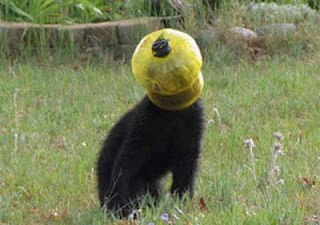 It was no honey pot like in "Winnie the Pooh" but a bear cub in Wisconsin was spotted with a bird feeder stuck on its head.
A landowner in the northwestern part of the state told the state Department of Natural Resources about the cub over Memorial Day weekend. But the mother was so protective that DNR officers couldn't get near the cub, who was still able to climb a tree.
When the DNR set out a live trap this week, it caught both the cub and the mom. The feeder was found in pieces next to them, possibly chewed apart by the mom.
Both bears were released into the woods.
.
Posted by The Man at 7:47 AM