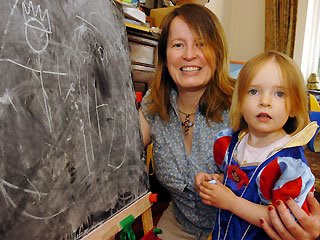 She's 2. She plays with dolls and draws with chalk. And apparently, she's one of the smartest people in Britain.
Karina Oakley of Guildford, Surrey, near London, has an IQ of 160 — the same as physics professor Stephen Hawking and Microsoft founder Bill Gates.
"She has a very good memory," her mother said. "She seems to be quite aware of her surroundings, what's going on around her, she's very observant, she talks all the time, asks questions all the time."
Intrigued by her daughter's exceptional language and memory abilities, Fraser had her tested after seeing a TV show about child prodigies.
"During the test it was noted that she gave imaginative responses to questions," When Prof. Joan Freeman, a child-psychology expert, administered the classic Stanford-Binet IQ test to the little girl, she noted imaginative responses.
"What do you use your eyes for?" brought the answer, "You close them when you go to sleep" and "You put your contact lenses in them."
IQ scores are derived by evaluating how well a subject does compared to others of his or her own age. A perfect age match would result in an "average" score of 100, while a 6-year-old who had the same results as an average 9-year-old would score 150, or "genius" level.
Freeman thinks Karina's IQ may only go up as she gets older, though Fraser says whatever happens, she'll always be her little girl.
"I just think of her as Karina," the mother said. "I don't have anyone to compare her to."
.
Posted by The Man at 10:10 AM