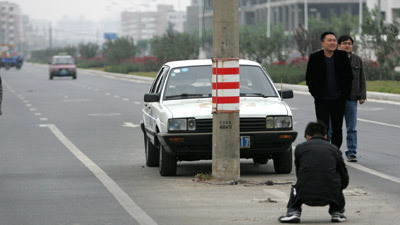 Planners have driven motorists into a pole - by leaving a 40ft utility pole in the middle of a six lane highway.
The unmarked and unlit pole - in Zhengzhou, central China - has been the cause of dozens of accidents as unwary drivers smash into it.
And road signs only a few yards from the pole show an arrow directing drivers right into it at 50mph.
"We have complained to the council but they say it would cost too much to bury the cables underground so we are stuck with it," said local resident Chang Feng, 33.
The problem was caused when the road was widened and made worse when builders added an arrow less than 350 feet from the pole pointing straight at it.
The utility pole belongs to the local power authorities who explained that the pole used to be on the road side, but due to the widening of the road, the pole is now in the middle of the road.
A spokesman from the power authorities said: "They should have informed us before the road widening project, but none of us knew this. Now it's too expensive to move the pole."
.
Posted by The Man at 1:20 PM