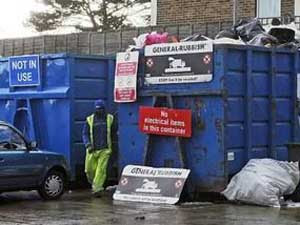 A couple who tried to walk to their local recycling tip were turned away for health and safety reasons and told to make the 400 yard journey in their car instead.
David and Katie France thought they were being "doubly green" by taking their waste to the rubbish dump on foot.
But on arrival they were told it was unsafe for them to walk onto the site in case they got run over by a car.
Mr. France, 67, left his wife and the rubbish at the gate while he walked back home to get their Toyota Avensis car.
When he reached the depot he picked up his wife, loaded the vehicle with the recycling, drove onto the site and disposed of the rubbish before driving home.
Mr. France said: "It was farcical. I thought we were being doubly green by taking our recycling there on foot.
"But whatever good we did in recycling our waste was probably counteracted by the CO2 emissions we used up in our car."
The council responsible for tip said that because there is no "dedicated pedestrian access point" it was unsafe for people to walk there.
The couple, from Blandford, Dorset, had bits of unwanted scrap metal to get rid of so thought it best to take it to the nearby recycling centre.
Mr. France said they were met at the gate by an attendant in a fluorescent jacket who told them they weren't allowed in.
He said: "We didn't want the metal to scuff the upholstery in the car and we felt it was silly to take the car such a short distance.
"When we reached the tip we were met at the gate and told we couldn't come in.
"We asked why and the blanket phrase of health and safety was given as the reason.
"I can only assume we might have got run over by a car had we entered the tip on foot,
"So I had to leave my wife there while I dashed home to get the car. Katie jumped in at the gate and we unloaded the scrap metal.
"As we did so, another worker there offered to help us. You couldn't make it up."
Mr. France, a retired radio producer, said: "It is patently absurd that anyone without a car, or anyone who wishes to be 'green', is barred from the site.
"There is no logic here because people in cars have to get out and walk to unload their recycling.
"The signs outside the center make no mention of 'no pedestrians'. This was a job worth having his moment of power."
Mr. France has since written a letter of complaint to Dorset County Council about the episode but said he has received no proper explanation or apology.
A council spokesman said: "In general terms, the household recycling centers are designed for access by car and do not have dedicated access points for pedestrians.
"If residents have walked with the waste from their home then they will be allowed access on foot but will be advised against this practice on safety grounds."
He said the council will look into providing access for pedestrians when looking at the design of future recycling centers.
.
Posted by The Man at 1:29 PM