Woman diagnosed with fear of vegetables 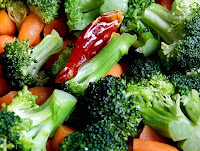 Vicki Larrieux, a 22-year-old student from Portsmouth, claims she is unable to keep to a healthy diet because she is frightened of vegetables.
She suffers from a fear known as lachanophobia, which leaves her sweating and stricken with panic attacks at the merest sight of a sprout or a pea.
Miss Larrieux survives on a diet of meat, potatoes, cereals and an occasional apple but refuses even a single slice of carrot on her dinner plate.
"I have always had an irrational fear of vegetables even as a child I used to properly freak out if some carrots or a few peas were on my plate," she said.
"But as it continued into adult life I started to think it might not just be a dislike for vegetables but an actual phobia.
"Every time I would see vegetables not just on my plate, but anywhere I would get feelings of panic, start sweating and my heart rate would shoot up.
"People might think it is a bit of a laughable affliction but I have a genuine fear of greens it's not just that I dislike the taste of sprouts or broccoli, but the actual sight of them fills me with dread and I could never touch them."
.
Posted by The Man at 3:29 PM