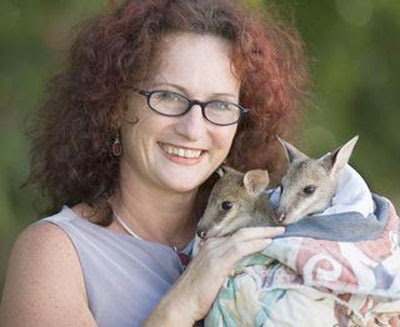 Sunbus says it was just following rules when it would not let a volunteer animal rescue worker carrying two wallaby joeys on board.
The incident happened on Thursday as Tanya Dunham was trying to make her way to open the Far North Queensland Wildlife Rescue Center at Manunda.
She had been called in to cover for a sick colleague and, with her car off the road, Ms Dunham was forced to take the bus.
Trying to get a ride from Kewarra Beach, Ms Dunham was not allowed on the bus after the driver was told by head office not to let the eight-month-old wallaby passengers on.
Ms Dunham then started walking in the rain with her laptop, brief case and two wallabies named Diego and Dexter in her handbag.
The wallaby orphans were brought into the refuge a couple of months ago and Ms Dunham took them home to care for them.
"I have to be with the wallabies all the time, they’re like kids … I told him (the bus driver), normally I wouldn't but the center has been inundated with calls," she said.
"I thought it was very un-Australian."
Ms Dunham was eventually given a lift by a friend who saw her walking in the rain.
Sunbus spokesman Richard Gabasa said under State Government law, an animal not used to assist a passenger with a disability was prohibited from entering the bus.
"A person must not take an animal, that is not an assistance animal, on a public passenger vehicle without the permission of the operator or driver of the vehicle," he said.
"Our first priority is the consideration of the travelling public."
All workers at the volunteer rescue organization have to take home animals brought into the center, which acts as a call service and drop-off zone.
.
Posted by The Man at 10:57 AM