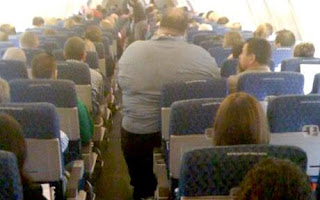 Obese air passenger in economy seat has picture taken
An image of an obese passenger squeezed into an economy airline seat has reopened a debate about how airlines deal with growing numbers of oversized passengers.
The picture, posted on an aviation blog, was reportedly taken by a flight attendant to illustrate to airline managers the difficulty of dealing with passengers who cannot fit into seats.
It is unclear if the man was aware his picture was being taken or whether the flight, on US carrier American Airlines, took off with the passenger spilling out of his seat.
Airlines already offer extended seatbelts to larger passengers to comply with safety rules but a number of carriers now insist obese customers buy an extra seat.
.
Posted by The Man at 12:48 PM