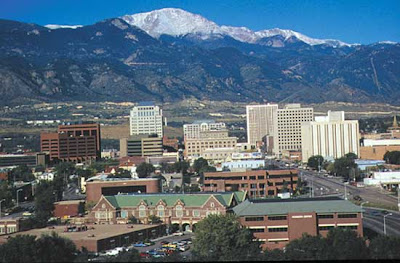 This tax-averse city is about to learn what it looks and feels like when budget cuts slash services most Americans consider part of the urban fabric.
More than a third of the streetlights in Colorado Springs will go dark Monday. The police helicopters are for sale on the Internet. The city is dumping firefighting jobs, a vice team, burglary investigators, beat cops — dozens of police and fire positions will go unfilled.
The parks department removed trash cans last week, replacing them with signs urging users to pack out their own litter.
Neighbors are encouraged to bring their own lawn mowers to local green spaces, because parks workers will mow them only once every two weeks. If that.
Water cutbacks mean most parks will be dead, brown turf by July; the flower and fertilizer budget is zero.
City recreation centers, indoor and outdoor pools, and a handful of museums will close for good March 31 unless they find private funding to stay open. Buses no longer run on evenings and weekends. The city won't pay for any street paving, relying instead on a regional authority that can meet only about 10 percent of the need.
"I guess we're going to find out what the tolerance level is for people," said businessman Chuck Fowler, who is helping lead a private task force brainstorming for city budget fixes. "It's a new day."
Some residents are less sanguine, arguing that cuts to bus services, drug enforcement and treatment and job development are attacks on basic needs for the working class.
"How are people supposed to live? We're not a 'Mayberry R.F.D.' anymore," said Addy Hansen, a criminal justice student who has spoken out about safety cuts. "We're the second-largest city, and growing, in Colorado. We're in trouble. We're in big trouble."
.
Posted by The Man at 6:39 PM