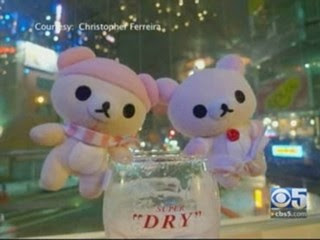 We've all heard of people offering big rewards for lost pets. But an Oakland couple is offering a $1,000 reward for two tiny stuffed bears worth $10, over their sentimental value.
Christopher Ferreira is ready to shell out what might be a second mortgage payment to some, for stuffed bears that are now lost. The professional piano player and his girlfriend bought them two years ago in Japan.
To Ferreira, they aren't just any bears. He has photographed the Korilakkuma-style toys, named Number 1 and Number 2, while traveling the world and has made elaborate home movies.
On January 24th, Ferreira said they were dropped accidentally at the AMC Bay Street 16 Theater in Emeryville. Since then he's posted flyers, held up signs and started a website where you can contact him about the bears.
.
Posted by The Man at 11:31 AM