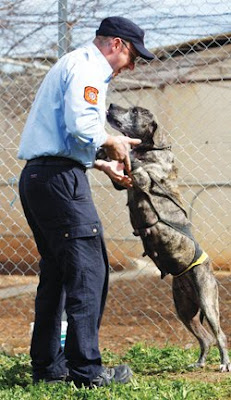 When a mixed breed pit bull terrier walked into a busy supermarket, animal welfare officers, called in by staff, were shocked to find it had a stillborn puppy trapped inside.
The staff at Scotts Supermarket, in Naxxar called the Animal Welfare Department on Saturday afternoon to report that a stray dog had walked into the supermarket, welfare officer Godric Marston said.
The dog, named Mel after the girl who called for help, lay down on a carpet in the supermarket and remained still.
"On arriving at the supermarket, I realized there was something unusual about the dog. On closer look, I could see a part of the puppy. It was dead but still inside her. It was clear this dog needed to be operated upon immediately or she would die," Mr. Marston said.
He rushed the dog to Happy Paws, a veterinary clinic, where it was immediately operated on. Recovering after undergoing operation.
.
Posted by The Man at 12:28 PM

Lovely story. I could be wrong, but I think dogs usually give birth to litters. If this was the case with this one, there might be some newborn puppies around Naxxar with no mother to take care of them....