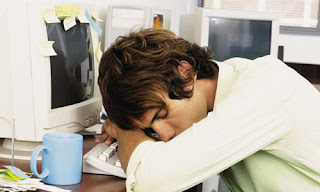 Psychologists say an afternoon nap after lunch improves people's learning capacity
Psychologists say sleep clears the brain's short term memory and makes space for new facts to be remembered
Curling up for an afternoon nap can improve the brain's ability to learn by clearing out cluttered memory space, psychologists say.
People who nodded off for an hour after lunch performed better in learning tests than those who stayed awake all afternoon, the scientists found.
A study of students revealed that their brains were refreshed by napping only if they entered what is called stage 2 non-REM sleep, which takes place between deep sleep and the dream state, known as REM or rapid eye movement sleep.
.
Posted by The Man at 9:12 AM