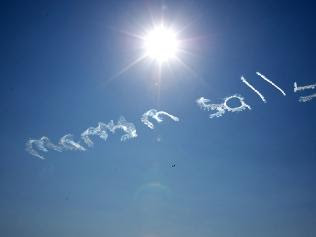 A lucky woman named Sally would have had the surprise of her life when she looked skyward this morning.
The words "Marry me Sally" were written above Sydney’s inner west around 10am, much to the delight of thousands of people and hopefully Sally.
The original – and expensive – proposal had a slight glitch when the sky-writer missed the "e" on the end of "me".
But a quick turnaround saw the missing letter added on at the end, completing the big question.
Sally’s partner picked the perfect day to pop the question – the first day of clear sky in several weeks.
.
Posted by The Man at 5:08 PM