She may look like she's had an accident with a bowl of spaghetti.
But five-month-old Almita Knutsson's unusual head wear has a far more serious purpose.
From the 128 probes attached to her scalp monitoring electromagnetic brain activity, scientists will gather information they hope could lead to a breakthrough in the understanding of autism. 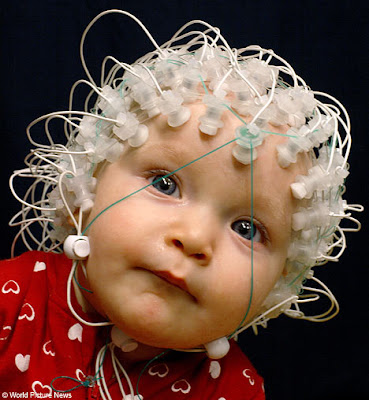 Weird and wonderful:
Five-month-old Almita takes part in the attempt to help scientists understand autism
The Baby Lab project studies up to 20 children at a time, examining what is going on inside their heads as they are shown a variety of different objects or colors.
"Our goal is to learn how we communicate with each other, how we interpret other people's feelings and other peoples reactions," said project leader Dr Par Nystrom. 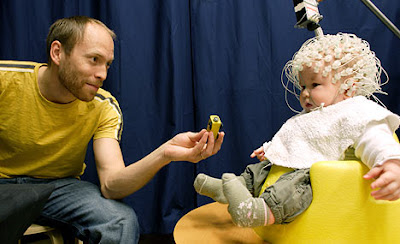 Brainwave: project chief Par Nystrom in the Baby Lab
"Kids with autism have problems in these specific areas. In the future we hope to be able to help them."
Over half a million people in the UK suffer from autism, which leaves them struggling to communicate effectively. Boys are four times more likely to develop it than girls and there is no known cause and no cure.
Researchers at Uppsala University, north of Stockholm, invested hundreds of thousands of pounds in developing equipment suitable for the studies, which are being conducted on children between four and 12 months.
Initially the probes were too heavy and uncomfortable for the babies, but engineers-have now created a lightweight net of foam-covered sensors which makes the experience much more palatable.
Sessions last for less than half an hour and parents are always by the baby's side.
"The difficult thing with kids is that we have to arrange the experiment as a kind of playtime to keep them happy," said Dr Nystrom.
"So we play with objects, for example a toy train, and monitor their gaze as we move it around." The brain more than doubles its volume over the first year of life and changes substantially as the baby develops.
The Swedish scientists established the experiment to help them learn more about that rapid early development.
One of the key areas of study is eyesight, which changes dramatically from the first few weeks when a baby cannot focus on objects further than eight to 15 inches away, to being able to track objects such as a toy at greater distances.