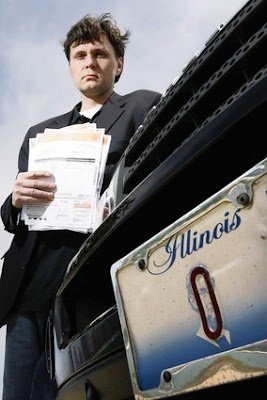 Driver with "0" as his plate number wrongly gets dozens of parking-related tickets
Chicago authorities say an error while testing equipment led to a man with a license plate reading "0" receiving about 170 tickets he did not deserve.
The Chicago Department of Revenue said it has been using "0" as a placeholder license plate for testing parking ticket equipment and officials were unaware Tom Feddor had that number as his official plate, the Chicago Tribune reported Monday.
Feddor said that beginning in 1997, his mailbox has been filling up with citations for violations, including parking at expired meters, parking during street-cleaning hours, running stop signs or traffic signals, and parking a truck, recreational vehicle, bus or taxi on a residential street.
Feddor said he went to the Revenue Department and the Department of Administrative Hearings for help, but was unable to resolve the issue. Hearing officer Zipporah Lewis made several calls to officials in an attempt to help Feddor, but he said "the people she encountered at the other end of the phone seemed to be annoyed and bothered by her. Most tried to quickly end the call."
Revenue Department spokesman Ed Walsh told the Tribune officials were unaware there was a "0" plate in circulation -- Feddor's family has been using it for 40 years -- or that he was receiving tickets from the equipment testing. He said the tickets would be wiped out and any fines paid by Feddor would be refunded.
"The test violations should have been dismissed in the database. The majority of the cases (Feddor) contested successfully. But we are taking steps to rectify the situation so in the future an actual registered plate number will not be used to do the testing," Walsh said.
.
Posted by The Man at 3:38 PM