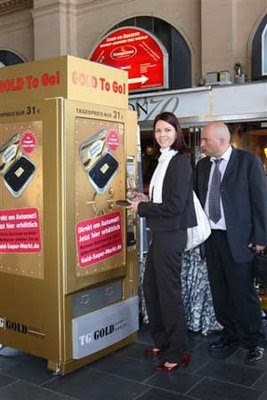 Shoppers in Germany will soon be able to buy gold as easily as bars of chocolate after a firm announced plans to install vending machines selling the precious metal across the country.
TG-Gold-Super-Market aims to introduce the machines at 500 locations including train stations and airports in Germany.
The company, based near Stuttgart, hopes to tap into the increasing interest in buying gold following disillusionment in other investments due to the economic downturn.
Gold prices from the machines – about 30 per cent higher than market prices for the cheapest product – will be updated every few minutes.
Customers using a prototype "Gold to go" machine at Frankfurt Airport on Tuesday had the choice of purchasing a 1g wafer of gold for €30, a 10g bar for €245, or gold coins.
A camera on the machine monitors transactions for money laundering controls.
Posted by The Man at 3:11 PM