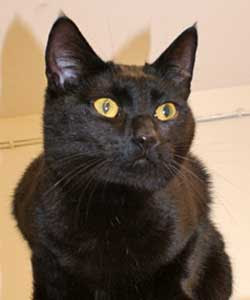 A Wellingtonian's missing pet cat turned himself in to police. Rubiks the cat was missing for two weeks after running away from his home in the Wellington suburb of Mt Cook.
But yesterday the black cat simply walked into the Lower Hutt police station, bringing his escapade to an end.
Realising the cat was probably lost, police called the Wellington SPCA and the owners were traced through a microchip he was wearing.
A relieved owner collected Rubiks, but had no idea how he found his way to Lower Hutt.
It was the second time Rubiks had run away from home. The first time he went missing for six weeks and was eventually found in Kilbirnie.
.
Posted by The Man at 10:02 AM