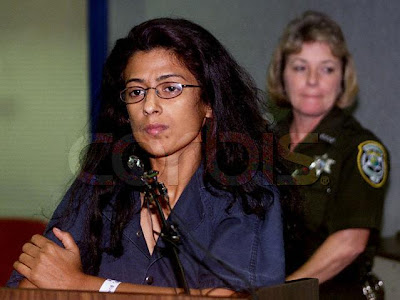 One of the most senior members of Saudi Arabia's royal family, Princess Maha al-Sudairi, is claiming diplomatic immunity in France after running up unpaid shopping bills of more than £15 million including £60,000 on designer lingerie.
She has ignored her furious debtors and locked herself in her £2,500-a-night suite at the George V Hotel in Paris.
When a royal aide was approached about settling the underwear bill he replied: "I'm afraid we can't go around settling bills for the Princess's undergarments."
Princess Maha, whose husband, Prince Nayef, is interior minister and second-in-line to the Saudi throne, is said to have spent millions on designer clothes, jewels and other luxury products in the French capital over the past year. Her weekly dry cleaning bill alone was said to be £30,000.
Every time the Princess and her entourage visited a shop a representative would offer staff an embossed document stating "Payment to Follow".
.
Update:
Saudi pays up in Paris
.
Posted by The Man at 11:30 AM