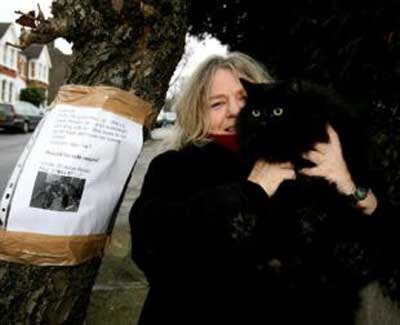 A teacher who put up "missing" posters in a bid to find her beloved cat Fluffy was astonished to be hit with a £75 for graffiti by her local council.
Lynda Dyson was overjoyed when the A4 computer print-outs she taped to trees and lampposts near her home in east London helped to reunited her with the three year-old, black Persian cat.
But her delight was short-lived after a demand for £75 from the local council's enforcement department landed on her doormat.
The fine was issued under Section 43 of the Anti-social Behavior Act, which polices fly-posting and graffiti.
Mrs. Dyson said home-made posters have helped people to find missing pets for centuries and should be treated differently.
"In a world where there is less and less community spirit, to impose a law and fine me for something like this is horrible," she said. “Pets are a very important part of people's lives. Without those notices, I would never have got her back.
“I don't see it as being anti-social behavior at all. Fluffy is outraged.”
A spokesman for Waltham Forest Council said the fine, issued last month, was given "in error" and later cancelled.
"In this case a mistake was made and we would like to apologize unreservedly to Ms Dyson for any offence or alarm that was caused," he said.
.
Posted by The Man at 2:37 PM