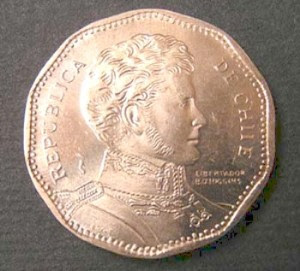 He only misplaced a single letter but it was one “L” of a costly mistake for the general manager of the Chilean mint.
Gregorio Iñiguez and several other employees have reportedly been sacked after they minted a set of 50-peso coins with the name of their nation spelt incorrectly.
The coins were released into the circulation
with C-H-I-I-E stamped on the front where it should read C-H-I-L-E.
The coins have since become collectors' items and the mint says it has no plans to take them out of circulation.
People have reportedly been hoarding the coins in the hope their value rises.
But the mistake has cost the mint's general manager, Gregorio Iniguez, and several other employees, their jobs.
It is not the first embarrassing blunder at the Chilean mint. Last October, someone there sold a rare medal, which should have been housed in the institution's museum, to a coin collector.
A month later, another medal - this one bearing the face of the country's then President Michelle Bachelet - was inadvertently sold on the open market.
.
Posted by The Man at 5:12 PM