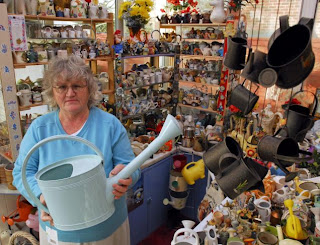 Hilary Taylor was left a rather unusual part of her uncle’s estate when he died – 3,000 watering cans.
Ken Stickland – known as Watering Can Man – filled his shed, greenhouse, garden and even an entire floor of his house with his beloved collection.
Mr. Stickland – who died last month, aged 78 – even kept a meticulous record of every watering can, including many he made himself.
‘I have heard of people collecting teapots or stamps... but this?’
‘He was such a fascinating person. He started his collection in 2001 but I have no idea why. I suppose it kept his mind occupied and he had something to get up for.
‘Nearly every charity shop in the area knew him because he was always looking for watering cans.
‘He did not have a favorite, he just loved them all. Sometimes he would come home to find people had left them on his doorstep.’
Mrs Taylor admits she doesn’t know what to do with the collection and may sell it in aid of charity.
One particular can will be always special though – as her uncle’s ashes are held in it.
.
Posted by The Man at 5:17 PM