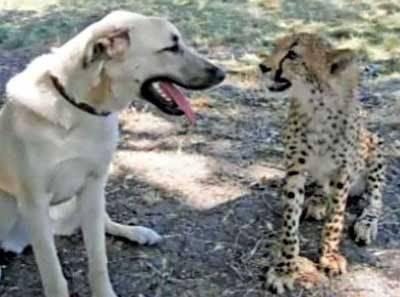 Wildlife Safari in Winston, Ore has rare animals from across the globe - like rhinos, lions and even an Anatolian Shepherd.
And the rare thing about the Anatolian Shepherd female at Wildlife Safari is not her breed, but her roommate - who just happens to be the fastest predator on earth.
"It's a very popular question of why we have a dog and a cheetah out there and it's a common practice that a lot of institutions across the United States are doing right now in an effort to tell this very conservation story," said Dan Brands, Curator at Wildlife Safari.
As a single birth cheetah cub, Sanurra was abandoned by her mother, which opened the door for these two to be brought together.
"Rather than let Sanurra grow up alone we were able to bring in a dog as a sibling, basically like her sister, and they have been together ever since," said Sarah Roy, cheetah supervisor at Wildlife Safari.
This odd pairing was no accident, as an Anatolian Shepherd is very protective and that natural instinct could be the key to saving the wild cheetah population.
"Anatolians will be like that no matter how they are raised, whether it's with goats or whether it's cattle. So the farmers get these dogs as puppies and a big barking dog is plenty to keep a cheetah away from their livestock. And in turn, farmers are shooting less cheetahs because right now they are a shoot-on-sight animal," said Roy.
While these roommates may be considered the odd couple at Wildlife Safari, caretakers says it's like nothing they've ever seen.
"When we take the dog for her daily walk, the cheetah sits on her house and waits for the dog to come back and if we take Sanurra down to the village for the day, Ellie cries and whines for her cheetah to come back, so they do miss each other," said Roy.
That type of bond could change the road ahead for cheetahs in Africa.
.
Posted by The Man at 6:27 PM