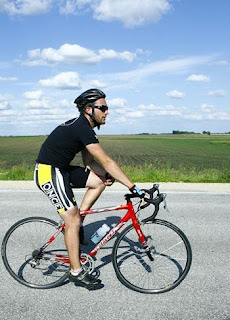 A friend told Eric McDermott of Salem, Ore., that Iowa would be flat and straight across.
McDermott, a 22-year-old college graduate, also figured the state would be mostly brown farmland this time of year, and was pleasantly surprised when he rode his bike through this week.
"It’s actually kind of nice and green, kind of rolling hills," he said.
Iowa is the fifth state McDermott is riding his racing roadbike through on a cross-country tour of the northern United States. It’s a way for him to celebrate receiving his bachelor’s degree from Humboldt State University and to take one last adventure before his job begins in July.
But more importantly, McDermott hopes it’s a good way to raise $50,000 for multiple sclerosis research. He is riding in honor of two of his aunts who contracted the disease.
"He’s just really enjoyed meeting people along the way," said McDermott’s mother, Debra McDermott. "Most of his route takes him through small towns, and the number of people who have MS or know someone with MS is unbelievable."
Riding solo, with his parents driving the sag wagon, McDermott rode into the Comfort Inn in Cedar Falls Thursday and planned to leave early this afternoon without much fanfare. He’ll continue on through Illinois, Indiana, Ohio, Pennsylvania, New York, Connecticut, Massachusetts, Rhode Island and New Hampshire before ending at the northern tip of Maine.
McDermott hopes his ride attracts attention to the cause, and people are encouraged to go on his Web site to view pictures, read his travel blog and donate.
.
Posted by The Man at 12:38 PM