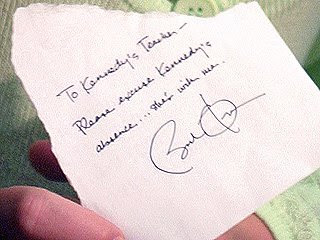 Ten-year-old Kennedy Corpus has a rock-solid excuse for missing the last day of school: a personal note to her teacher from President Barack Obama.
Her father, John Corpus of Green Bay, stood to ask Obama about health care during the president's town hall-style meeting at Southwest High School on Thursday. He told Obama that his daughter was missing school to attend the event and that he hoped she didn't get in trouble.
"Do you need me to write a note?" Obama asked. The crowd laughed, but the president was serious.
On a piece of paper, he wrote: "To Kennedy's teacher: Please excuse Kennedy's absence. She's with me. Barack Obama." He stepped off the stage to hand-deliver the note -- to Kennedy's surprise.
"I thought he was joking until he started walking down," Kennedy said after the event, showing off the note in front of a bank of television cameras. "It was like the best thing ever."
The fourth-grader at Aldo Leopold elementary in Green Bay already knew what she was going to do with the note: frame it along with her ticket to the event. She said she'd make a copy for her teacher.
Kennedy said she had never seen Obama before. "He's really nice," she said.
As part of his latest effort to push for aggressive action on health care this year, Obama said at the town hall that Americans who can't afford health insurance need to be provided with more affordable options -- provided by the government if not private insurers.
The president said a public health insurance option, which Republicans strongly oppose, should be included in any plan to keep the insurance companies honest and prices down.

.
4th grader playing hooky gets an excuse note from President Obama
.
.
Posted by The Man at 10:21 AM