Did you know that there are 206 bones in the adult human body and there are 300 in children (as they grow some of the bones fuse together.)

Flea's can jump 130 times higher than their own height. In human terms this is equal to a 6ft. person jumping 780 ft. into the air.

The first toilet ever seen on television was on "Leave It to Beaver."

All polar bears are left handed.

At 90 weapons per 100 civilians, the US has the world's highest rate of gun ownership, according to the Small Arms Survey 2007.

In 2005, the US government spent about $71 billion for Operation Iraqi Freedom.

There are over 60 million dogs in the US.

More than half of women in the United States will not leave their home without makeup on.

The first product to have a bar code was Wrigley's gum.

Women blink nearly twice as much as men.

The Hawaiian alphabet consists of only 12 letters.

About 17% of humans are left-handed. The same is true of chimpanzees and gorillas.

Google's name is a play on the word googol, which refers to the number 1 followed by one hundred zeroes. 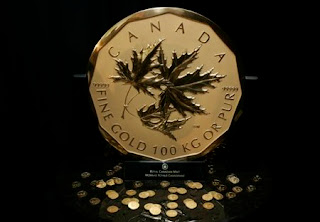 The Royal Canadian Mints' world's first 100 kilogram pure gold coin with a $1 million face value sits amongst much smaller 1oz gold coins at its unveiling, in Ottawa Thursday, May 3, 2007.

OTTAWA (AP) - Got change for a million? Canada does: the world's biggest pure gold coin at 200 pounds. Already, three buyers have shelled out for one of the 1 million Canadian dollar coins introduced last week.
The Royal Canadian mint made the coins - 20 inches in diameter and 1 inch thick - mostly to seize the bragging rights from Austria, which had the record with a 70-pound, 15-inch wide coin.
"They're not doing this because there is huge demand for 100-kilo gold coins," Bret Evans, editor of Canadian Coin News said Saturday. "They're doing it because it gives them some bragging rights in having the largest purest gold coin in the world."
"They'll kick the Austrians out of the Guinness World Book of Records," he said.
Listed as 99.999 percent pure gold bullion, the coin features Queen Elizabeth II on one side and Canada's national symbol - the maple leaf - on the other.
It takes about six weeks to make and has a face value of 1 million Canadian dollars ($903,628), though it sells for approximately $2.7 million depending on the market value of gold.
The coins will give the mint a higher international profile.
"We wanted to raise the bar so that we could say the government of Canada, or the Royal Canadian Mint, produced the purest gold coins in the world," said David Madge, the mint's director of bullion and refinery services.
Austria's coin 100,000 euro coin ($138,155) was 70 pounds and 15 inches in diameters.
Evans said the Canadian mint recently lost some market share as mints in Australia, Austria, China and the United States pushed their own high-quality gold coins.
What does one do with a 220-pound gold coin?
Evans said bullion dealers use it as a promotional tool. A Japanese dealer, he said, puts one of the Austrian coins in public venues to draw people's attention.
"And while they're looking at that, they are being exposed to the idea of buying one ounce or half-ounce gold coins," he said.
Posted by The Man at 10:20 AM No comments: 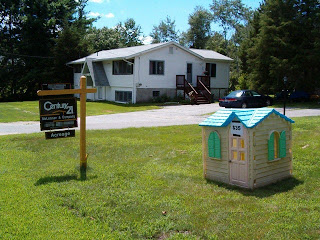 After a lengthy sitting before
the mirror applying the "miracle" products, she asked,
"Darling, honestly, what age would you say I am?"

Looking over her carefully, Harold replied,
"Judging from your skin, twenty;
your hair, eighteen; and your figure, twenty five."

"Oh, you flatterer!" she Blushed.

"Hey, wait a minute!"
Harold interrupted.
"I haven't added them up yet."
Posted by The Man at 4:40 AM No comments:

Rule 2: The world won't care about your self-esteem. The world will expect you to accomplish something BEFORE you feel good about yourself.

Rule 4: If you think your teacher is tough, wait till you get a boss.

Rule 5: Flipping burgers is not beneath your dignity. Your Grandparents had a different word for burger flipping: they called it opportunity.

Rule 6: If you mess up, it's not your parents' fault, so don't whine about your mistakes, learn from them so you don’t do it again.

Rule 7: Before you were born, your parents weren't as boring as they are now. They got that way from paying your bills, cleaning your clothes and listening to you talk about how cool you thought you were. So before you save the world from the parasites of your parent's generation, try delousing the closet in your own room.

Rule 8: Your school may have done away with winners and losers, but life HAS NOT. In some schools, they have abolished failing grades and they'll give you as MANY TIMES as you want to get the right answer. This doesn't bear the slightest resemblance to ANYTHING in real life.

Rule 9: Life is not divided into semesters. You don't get summers off and very few employers are interested in helping you FIND YOURSELF. Do that on your own time.

Rule 10: Television and Computer’s is NOT real life. In real life people actually have to leave them and go to jobs.

Rule 11: Be nice to everyone because you never know when they might have the upper hand in life. Other wise do onto other’s the way you want it done to you.

Rule 12: Life will never be fair if you only think of yourself.
Posted by The Man at 4:36 AM No comments: 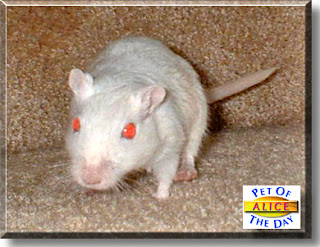 
This is Alice, she's an albino gerbil, so yes, her eyes are really red, it's not the camera's fault. I've had Alice for two years and she is very special to me. She's a quick as lightning little critter who is full of life and love. Her favorite things to do are burrow (even on the glass walls of her aquarium and in your hands) and shred everything in sight! She is funny and friendly and curious, too. She amuses us continually and it is so fun to have such a unique, albino gerbil like my Alice! I love her very much!
Posted by The Man at 4:27 AM No comments: