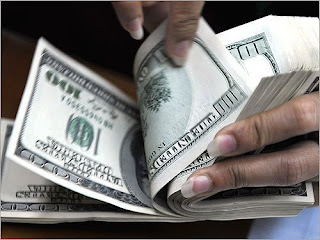 A Stuart, Florida man rescued a framed space shuttle photo from a trash bin -- and found a wad of treasure in the process.
Stuart police say Warren Bendix was going to put the photo in a different frame and discovered $3,100 in cash stuffed behind the picture.
He had found the picture while going through the trash near his apartment.
Bendix reported his discovery to police on Saturday. Police say Bendix can claim the money if the owner doesn't turn up.
.
Posted by The Man at 12:32 PM No comments:

Curious Chimpanzee Is Not Camera Shy 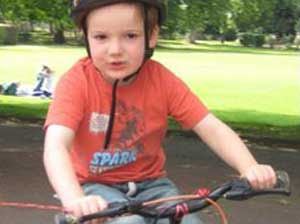 A seven-year-old boy from London who was aiming to raise £500 for the Haiti quake relief effort through a sponsored bike ride has raised more than £72,000.
Charlie Simpson, from Fulham, west London, cycled five miles (8km) around South Park near his home to raise funds for Unicef's earthquake appeal.
His call for support touched the hearts of people around the world after he put a message on the JustGiving website.
Unicef thanked him "on behalf of the many children in Haiti".
On his JustGiving page, Charlie said: "I want to do a sponsored bike ride for Haiti because there was a big earthquake and loads of people have lost their lives.
"I want to make some money to buy food, water and tents for everyone in Haiti."
Unicef is helping to provide water, sanitation, education and nutrition, as well as supporting child protection.
Money raised by Charlie will go towards its Haiti Earthquake Children's Appeal.
Along with donations, Charlie was flooded with messages of support.
One donor said: "Well done Charlie - you are an inspiration to us all."
A donor who read about Charlie's appeal in New Zealand described his ride as an "awesome" act of kindness.
Another donor said: "We're cheering you on from Hong Kong."
David Bull, Unicef's UK executive director, described Charlie's ride on Sunday as a "little seed" which had rapidly grown into something much bigger.
"This is a very bold and innovative gesture by Charlie that shows he connects with and not only understands what children his own age must be going through in Haiti, but is also wise enough to know that he can help them," he said.
"The little seed - his idea - that he has planted has grown rapidly and his is a place well-deserved in the humanitarian world.
"On behalf on the many children in Haiti, I thank Charlie for his effort."
.
Posted by The Man at 9:21 AM No comments: