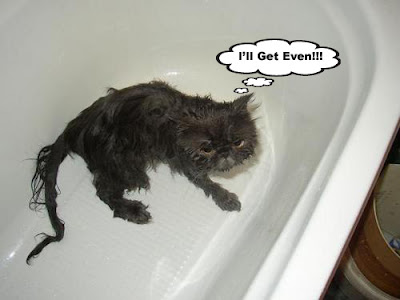 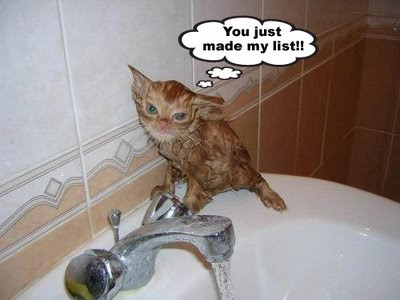 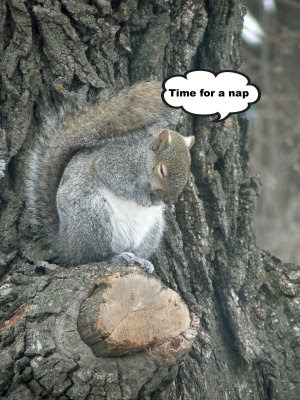 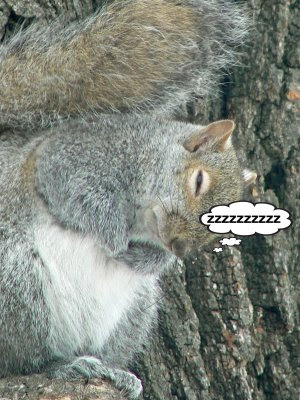 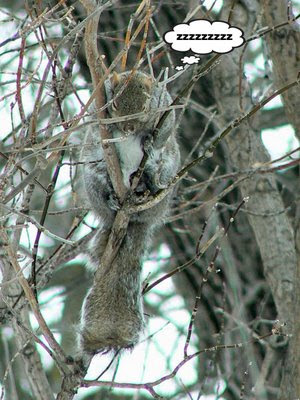 Escalator ads are the most awkward way to advertise 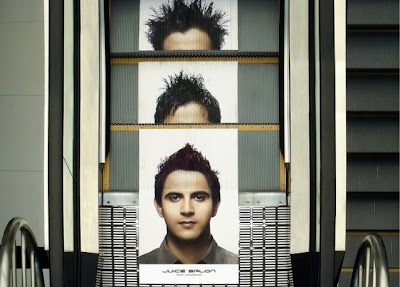 Here's a creepy way to advertise a hair salon: stick the lower half of some guys face at the bottom of an escalator, and place various hairstyles on the stairs. As the escalator moves, said guy gets a new haircut with every stair that passes by. It's at a mall in Mumbai, so it's not like I'm going to be forced to see it anytime soon, but if there's anything America likes its slapping advertisements on every surface available, so don't be surprised if you start seeing crap like this in malls and airports in the near future. 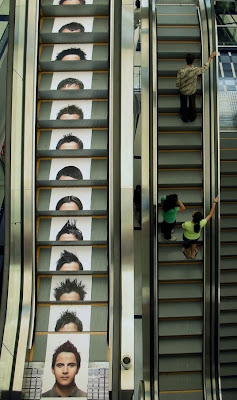 Fat cat put on strict diet after getting stuck

A massively overweight fat cat has been put on a strict diet after getting stuck in his flap.

Worried owner Molly Oliver, 68, considered Sooty's weight gain to be harmless but decided he ought to go to the vets when she had to pry him free from the door last month.

Vets were amazed to see the six-year-old had piled on the pounds since his last visit, tipping the scales at almost two stone - three times the size of a normal cat. 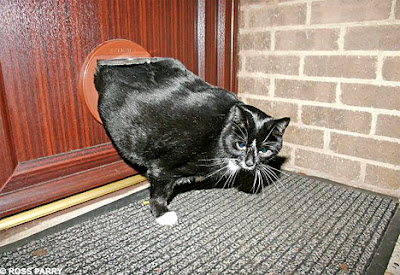 Challenge: The six-year-old cat is now on a low calorie diet - and is finding it easier to get in and out of the house

Animal lover Molly blamed over-generous locals for her pet's size - although she has now put her moggy on a strict low-calorie diet.

Luckily he has so far lost enough to be able to get in and out of his own house.

Molly said: "He's always been quite big but I feed him exactly the same amount as any other cat.

"He loves meat and I just give him normal size portions.


"Over the last couple of months I noticed he was getting stuck in the cat flap - it was quite comical to see his bottom wiggling as he squeezed through - but it was the final straw when he got stuck and could not get outside.

"I realized then how awful it must be for him.

"I was puzzled as to why he got so big. He had also stopped jumping around like he used to. 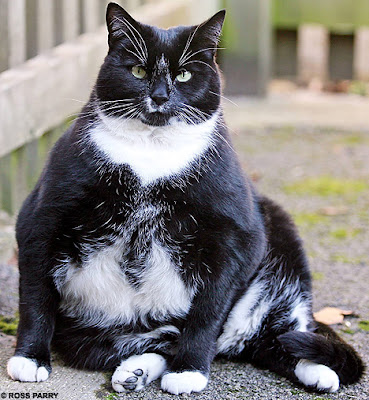 Fat cat: Sooty's owner Molly Oliver only got worried about his size when he got stuck in his flap

"They had seen him six months ago and couldn't believe how much weight he had put on.

"They were worried he could die if he stayed the same weight, apparently he could have got heart disease and diabetes so he must lose some pounds."

The corpulent cat is now on a special low-calorie diet - he's not allowed meat and has to be content with biscuits.

Molly has also been told to encourage him to cram his huge frame through the cat flap so he can play in the garden of her flat. 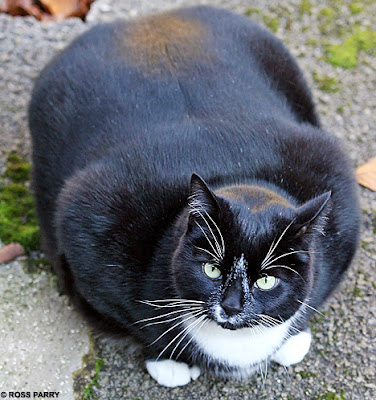 Puzzled: Sooty's owner Molly Oliver is still confused about how her cat put on so much weight
Molly, who is divorced and lives alone in Scarborough, North Yorkshire, was forced to give up her work as a customer services assistant 15 years ago due to severe arthritis.

She added: "I think it was people being kind and leaving food out for him that has led to him getting so big.

"Some of the locals leave lots of meat out for cats, they are only trying to be kind but Sooty was already being fed by me so he didn't need anymore.

"Cats can be greedy and I think he just took advantage."

"He's such a well-behaved and well-mannered cat but he just loves his meat too much. I've had him since he was a kitten and he is great company for me."

Vet Lisa Winter, who set up Sooty's diet and exercise program, said: "We do get overweight animals being brought in but I've never seen anything like this one.

"The average weight of a cat is four kilos and Sooty weighs 12 kilos, just under two stone.

"We will now weigh Sooty every month to see how he is progressing.

"With overweight cats we encourage them to play more. Some people get them to run up and down the stairs and some take them for a walk on a harness."
Posted by The Man at 3:08 PM No comments: 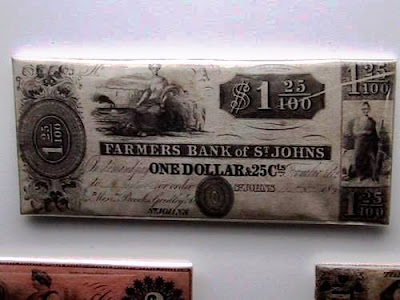 $1.25 Bill
From Newfoundland, on display at the currency museum in Ottawa, Ontario. 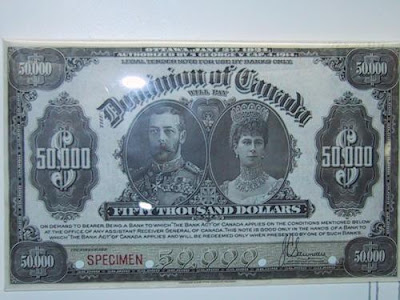 What "BIG" Teeth You Have 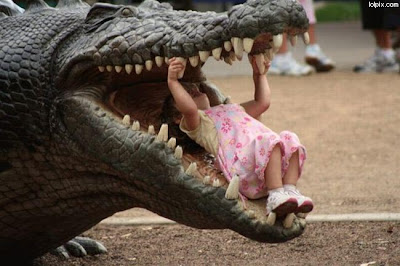 A Dog That Knows How To Sit 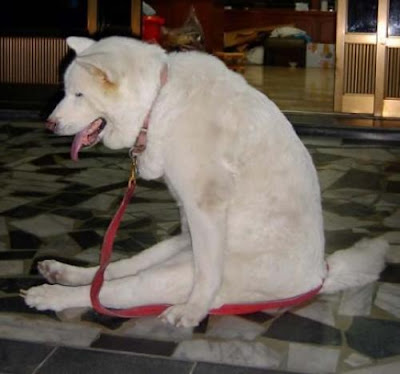 An engineer has promised that within a year he will start selling a car that runs on compressed air, producing no emissions at all in town. The OneCAT will be a five-seater with a glass fiber body, weighing just 350kg and could cost just over £2,500. It will be driven by compressed air stored in carbon-fiber tanks built into the chassis.
.
.
The tanks can be filled with air from a compressor in just three minutes - much quicker than a battery car. The designers say on long journeys the car will do the equivalent of 120mpg. In town, running on air, it will be cheaper than that. "The first buyers will be people who care about the environment," says French inventor Guy Negre.
Posted by The Man at 7:17 AM No comments: 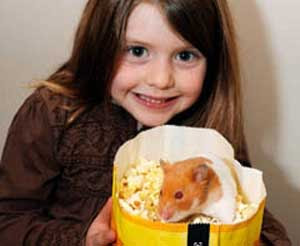 When five-year-old Sarah Stokes smuggled Hamish the hamster to the cinema, little did she know he’d end up starring in his own version of The Great Escape.
Excited by the screening of Alvin & the Chipmunks, the restless rodent jumped out of his owner’s bag and disappeared beneath the hundreds of seats in the darkened cinema.
The Pangbourne schoolgirl was so worried about telling anyone about returning hamster-less after Hamish’s illicit trip out that it was not until three days later that mom Holly Stokes realized he was not in his cage.
It was only after a top-to-bottom hunt through the house that young Sarah plucked up the courage to own up to smuggling Hamish to the movies.
After a flurry of phone calls to the Showcase cinema in Winnersh, staff found Hamish scurrying beneath the screen.
Mrs. Stokes said: "We all thought he had escaped from his cage and was lost in the house but a few days later Sarah admitted she had taken him out for an adventure. "Sarah's done a few things before but nothing to rival this." Hamish is now safely locked in his cage at home, being looked after by Sarah's big sister Rachel, aged 10.
Posted by The Man at 7:10 AM No comments: 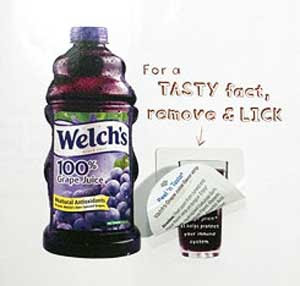 Welch's grape juice is taking out full-page print ads in People magazine this month that give readers a chance to sample its grape juice by licking the ad. The front of the advertisement shows a huge bottle of the juice, while the back has a strip that peels up and off, with text that reads: "For a TASTY fact, remove & LICK."
Marketers are excited about the prospects for lickable ads, but also have to deal with the "ick" factor. Since magazines are often passed from reader to reader (think doctors' offices) there is a good chance that saliva could be left on the ad. Readers are supposed to peel off the entire sticker on the Welch's ad before licking, says First Flavor, the company that developed the technology used in the ad. If someone doesn't rip off the whole sticker, First Flavor says, the flap can't reseal, giving people an easy way to know whether the ad has already been licked.
Welch's says it suspects some folks will pass on the free taste test. "A lot of people won't lick a magazine no matter how good it tastes," says Chris Heye, Welch's marketing chief.
The company, which is owned by a cooperative of grape growers, says it went to great lengths to make sure the ad tasted good and that the ingredients used in the lickable strip met safety guidelines laid out by the Food and Drug Administration. It says it spent weeks conducting consumer taste tests and enlisted more than 50 company employees to try the lickable ad. The ad was created by WPP Group's JWT.
Posted by The Man at 7:05 AM No comments:

A pre-school in the northern Swedish town of Koskullskulle has banned children from wearing clothes with stripes or polka-dots.
The reason for the ban is an employee at the school suffers from migraine headaches when viewing multi-colored clothes.
“It’s a pity for the employee and as a result I’ve tried to create an appropriate work environment. The person in question has a right to be able to work,” said pre-school principal Maj Norberg.
According to parents, children who come to school with “inappropriate” clothing are forced to change to monochrome clothes. According to migraine specialist Professor Carl Dahlöf at the Migraine Clinic in Gothenburg, it is possible for stripes to cause migraines. “It's true that certain people are very sensitive to different visual patterns. Some are so sensitive that even striped shirts and paving stones set in patterns can cause a migraine,” he said. However, Dahlöf had never heard that polka-dots could be a contributing factor to the painful headaches.
Posted by The Man at 7:00 AM No comments: