ANCHORAGE, Alaska — Someone has told the city of Anchorage what it can do with its cease-and-desist order to prevent Snowzilla — the giant snowman — from rising up again this winter in an east Anchorage neighborhood.
Snowzilla — thought to be no more — is yet again. Someone again built the giant snowman in Billy Powers' front yard. Snowzilla reappeared overnight.
Powers is not taking credit. When questioned Tuesday afternoon, he said Snowzilla just somehow happened, again.
However, he will tell you what Snowzilla means to him, a father of seven, and the children in the neighborhood.
"The snowman is about having all these kids, a lot of kids with big smiles on their faces," he said reached by telephone at his home, the sound of excited children in the background.
.
Posted by The Man at 8:35 AM No comments:

Grinch that Stole a Family Christmas 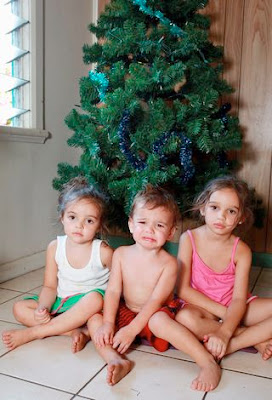 A CRUEL thief who broke into a Woree family's home and stole all their Christmas presents left three children Brooke, Tyreece and Skye Thompson were heartbroken to find all their presents gone.
Kate Baker came home from Christmas party with friends about 10pm on Sunday to find her children and young grandchildren sobbing and inconsolable over the mean-spirited crime.
The shock triggered a heart attack that led to the single mother being rushed to Cairns Base Hospital that night, before being released yesterday afternoon.
Just three days out from Christmas, the family now has to come up with the cash to buy all the presents again.
Ms Baker said although the total value of about 10 stolen gifts would have been about $1000 … including a gold watch with a dragon on the face, a fairy statue and two gift packs of Hilary Duff perfume … it was the fact someone could commit such a low act on her family that hurt the most.
"It’s not how much it cost me, even though I’m a single parent and work six days a week so I work pretty hard for it," Ms Baker said.
"It’s the fact that my three little grandkids have been adding to the pile each day, getting more excited every day and counting down the sleeps.
"Then to walk in and see it all gone, to see their little faces, it’s not fair.
"Who would do that?"
The presents were stolen when Ms Baker’s son Odin, 15, popped next door to his older sister Nicole Ryan’s house for dinner about 9.20pm for 20 minutes, leaving the house unoccupied but forgetting to lock the front door.
The teen yesterday said he kept thinking about what he would have done if he’d returned in time to catch the thieves.
"I wish I had. I would have done whatever it took to stop them," he said.
The family reported the thefts to police and door-knocked their Toogood Rd neighbors on Sunday night, but said so far nobody had reported seeing the thieves.
A small consolation came when the largest of the Christmas parcels, containing a battery-operated children’s car, was found in a rubbish bin across the road where it had obviously been discarded.
Other Christmas gifts that were not theirs were also found in the bin.
"It seems somewhere along the line they’ve done the same thing to a couple of other houses," Ms Baker said.
.
Posted by The Man at 8:24 AM No comments: