Thank you for calling...

Your call is important to us and will be answered by the next available person.
. 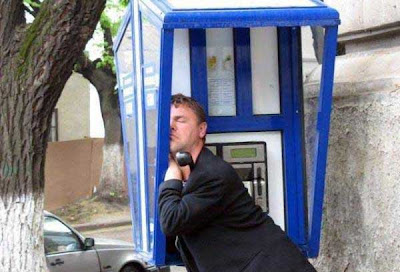 The Funniest Bird On This Planet will have you in stitches as he busts out unbelievable dance moves to Ray Charles hit Shake Your Tail Feather.
.
.
Posted by The Man at 11:27 AM 1 comment:

Student billed $200 for unwanted 911 call
It's a bill most people wouldn't expect. Someone calls 911 and firefighters arrive to help. But in some metro areas, that emergency help comes with a hefty price tag.
A Westminster man found that out and is warning others. Taggart Holston, 23, got into a single-car, non-injury rollover Feb. 20 on I-76 near 88th Ave. in Commerce City. South Adams firefighters showed up to help. And days later, he got a $200 bill from them.
"The bill they gave me is about how much I make in an entire week," says Holston.The Metro College student is upset about what's called "rescue billing."
"I got a bill alright. I just wasn't rescued," he says.
South Adams Fire is now charging victims, like Holston, who live outside the district and don't pay taxes funding their emergency services.
VIDEO.
.
Condo owner finds out he's been renovating the wrong unit
He bought his first home, poured $30,000.00 into it to fix up, now 6 months later Jonathon Kyte has learned his home doesn't belong to him.
"I froze, I just pointed at it, my wife was there, we were just speechless."
According to the city and county of Denver, Jonathon owns the dump, next door. He found out about the mistake almost by accident when he received a map which showed the unit he's living is actually unit number 4.
But he owns the deed and title to unit number 5. Jonathon blames the Coldwell Banker listing agent for the mistake. She marketed the property and provided the key to the unit Jonathon and wife have been living in. He called the listing agent again and again but she wouldn't return his calls. He also called the title company, " Colorado American Title, " and an employee promised to get back to him, but never did.
So Jonathon called Fox 31 News. We confronted the listing agent's supervisor, but he would not comment on camera. He said their lawyers were looking into it.
Jonathon is now considered a squatter in the condo --he thought he bought.
And all the people who were so willing to sell it to him, are unwilling to help.
VIDEO
.
Tattoo Jim said...
This would have been the last straw that put me over the edge... start that crazy laughing, pulling my hair, foaming at the mouth, eyes bugging out and then... just crying... for hours and hours and hours...
.
Posted by The Man at 11:23 AM No comments: