WELLINGTON, New Zealand (AP) - New Zealand authorities have blocked a couple's bid to officially name their new son "4real," saying numerals are not allowed.
Pat and Sheena Wheaton said they decided to name their new baby "4real" shortly after having an ultrasound and being struck by the reality of his impending arrival.
But when the parents filed the name with New Zealand's Registry of Births, Deaths and Marriages, they were told names beginning with a number were against the rules.
The government office has opened negotiations with the parents about the name under a policy that says all unusual names must be given case-by-case consideration.
Posted by The Man at 3:09 PM No comments:

A dog that covers herself up in bed

Check this out — a set of quadruplets are all stacking shelves at the same supermarket.
The 17-year-old lads — left to right Jack, Tom, Peter and Matt Nottingham — are employed at the same Sainsbury’s store in Hove, East Sussex. 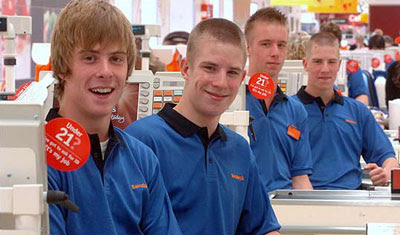 The boys wear matching uniforms and are identical apart from their different haircuts — but it is rare that all four are ever on the same shift. Jack said: “We work different hours so don’t get to see that much of each other.”
Posted by The Man at 10:34 AM No comments: