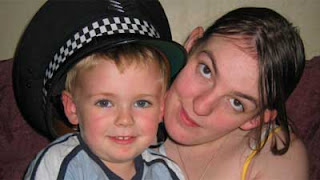 A three-year-old boy has saved his mother's life by dialing 999 after she suffered an epileptic fit. Jack Thomson used his mother's mobile to call the emergency services and told them she was lying sick in the hallway and his father was at work. The phone then cut-out. Undeterred, the youngster found another mobile and dialed 999 again. He was unable to say where he lived but the second call enabled operators to trace his location in Lochgelly, Fife.
The three-year-old was at home with his sisters Holly, two, and baby Kirsty when his mother became ill. After the phone call, police and ambulance crews forced entry into Jack's home and found his mother, Leanne, lying in the hallway. Paramedics attended to her and she is recovering at home. Police praised Jack for his quick action. Insp Duncan Ormiston said: "Without doubt, young Jack has saved his mum's life. Jack deserves a medal and I have arranged for a police hat and some goodies to be sent out to him as the Contact Center's honorary wee Special Constable."
With video featuring Jack's 999 call.
Posted by The Man at 8:19 AM No comments:

Giant Diamond Unearthed in Africa May Set Record
A huge gemstone that could become the world’s largest polished round diamond has been found at the Letseng Mine, owned by Gem Diamonds, in Lesotho, southern Africa.
The diamond weighs 478 carats and is the twentieth largest ever found. Gem Diamonds says that initial examination suggests that it has a flawless center and could produce a 150-carat round-cut white diamond worth tens of millions of pounds.
"Preliminary examination of this remarkable diamond indicates that it will yield a record-breaking polished stone of the very best color and clarity," the company's Chief Executive Clifford Elphick said in a statement.
The stone would dwarf the 105-carat Kohinoor in the Crown Jewels. The largest rough diamond found was the Cullinan, in 1905, which weighed 3,106 carats uncut.
Picture and More
.
Towing the line.
Tow trucks parade through NYC in world record bid.
Nearly 300 tow trucks rumbled through New York City on Saturday in an attempt to smash the world record for the largest parade of its kind.
Organizers think they hit the mark, with 292 trucks participating. The procession included flatbeds, wreckers and 50-ton rotators.
The trucks departed from Shea Stadium in Queens and cruised down a couple of highways before finishing at an abandoned airport tarmac to spell out "New York."
The previous world record was a parade of 83 tow trucks in August 2004 in Washington state.
Picture and More
.
Posted by The Man at 7:45 AM No comments: