Baby crocodiles call out when ready to hatch

Baby crocodiles call from their eggs to tell others in the nest when it is time to hatch, scientists have discovered. The calls, described by one researcher as an "umph, umph" sound, are thought to be critical to the survival of the animals. By calling and hatching together, baby Nile crocodiles increase the chances that a parent will remain at the nest and be able to protect them from predators in their first hours of life, scientists believe.
Writing in the journal Current Biology, Amélie Vergne and Nicolas Mathevon, at Jean Monnet University in Saint Etienne, France, describe how they divided crocodile eggs which were due to hatch within 10 days into three groups. One was played recordings of the pre-hatch calls made by baby crocodiles, a second was played random noises and a third left in silence. The researchers found that eggs played the pre-hatching calls often answered back, with many of them wobbling a little.
After 10 minutes, all of them had hatched.
Of the eggs in the other groups, only one egg that was played random noises hatched shortly afterwards, with the rest not emerging until at least five hours later.
With audio of the pre-hatch baby crocodile calls.
Posted by The Man at 9:50 AM No comments:

Diff'Rent Strokes-Whatchu Talkin 'Bout Willis
.
Read the rest here
Posted by The Man at 9:19 AM No comments:

Getting up to all kinds of mischief.
Posted by The Man at 9:17 AM No comments: 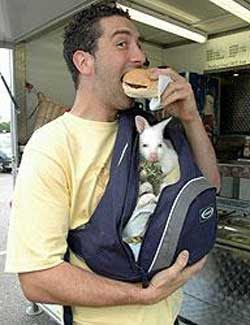 Stephen Rowlands of Tropical Inc, an animal re-homing center of Oldbury in the West Midlands, has been looking after the tiny marsupial after her mother died. He has become a surrogate mom to Millie, the five-month-old albino wallaby, by carrying her with him in a small sports bag around his waist to replicate the comfort and security of a natural pouch. "I take her shopping with me and she causes a bit of a stir. When she pops her head out of the bag, I see people almost crashing their trolleys in surprise," he said.
"Millie accompanies me everywhere, she has been to the dentist, has met my bank manager and has even kept me company while eating a burger in town.""I have been looking after her practically since birth and we have become quite close - it's like having a human baby," he said.
To continue the bonding, he even hangs the bag around his bedpost so he can check on her during the night.
Posted by The Man at 7:57 AM No comments:

3-Year-Old Uses Song Lyrics to Call 911 for Her Mother
GUTHRIE, Okla. — A 3-year-old girl used the simple song lyrics "911 green" to call 911 and get help after her pregnant mother fainted.
Jessica Eaves taught her daughter, Madelyn, the song a week before she fainted due to a medical condition called vasovagal syncope (vayzo-vay-gal SIN'-kuh-pea).
When the 24-year-old and 3-months-pregnant Eaves fainted, Madelyn picked up her mother's BlackBerry phone.
She pressed 911 and the green button and was connected to a dispatcher.
In the recently released 911 call, Madelyn was able to answer questions about her house and cars outside that led emergency workers to the home.
.
Ohio man repays borrowed gasoline after 34 years
An Ohio couple has been repaid for a liquid asset they shared 34 years ago. Violet and Harold Goff of Southington say a man showed up at their home recently and explained that he'd appeared at their door in 1974 when he was 17 and had run out of gas.
Back then, Harold Goff got a five-gallon can of gasoline for Jeffrey Hardin. Goff remembers telling the teen to make sure to pay it back.
Hardin still lives in the area and told the Goffs the debt had remained in the back of his head. So, he presented them with a plastic, five-gallon container of gas.
Harold Goff notes that he made a good investment, since the gas and container once worth about $5 are now worth $25.
.
School sends note to parents who give children unhealthy pack lunches
Parents cleaning out their child's lunchbox at the end of the school day could be in for a nasty surprise — a scolding note from teacher alongside the half-eaten sandwiches and empty crisp packets.
The School Food Trust wants teachers to send out warning letters to parents who fail to comply with school healthy-eating policies. And in advice that could be seen as patronising, the government-funded body suggests further that they send congratulatory letters to those who pack healthy lunches for their children.
Schools across the country were ordered to provide healthy lunches and remove vending machines filled with chocolate and fizzy drinks after a campaign led by the television chef Jamie Oliver exposed the poor standard of meals at many schools.
Most schools also ask parents not to give children crisps, biscuits or similar items for lunch, but the guidance from School Food Trust looks to harden the approach to unhealthy lunchboxes.
.
Grandmother, 46, gives birth to triplets
Grandmother Janelle Perry has given birth to naturally conceived triplet boys in a 'one in 10 million' delivery at Brisbane's Mater Mothers' Hospital.
Janelle and husband Robert's tiny trio - Cooper, Kyle and Jordan - were born at 34 weeks' gestation by caesarean section last Thursday. Doctors are "99.9per cent certain" the boys are identical.Mrs Perry, who turns 47 next week, now has eight children and is adamant that is enough.She has four children aged in their 20s from a previous marriage, a daughter, Rebecca, 4, with Robert, and two grandchildren.The Perrys, of Logan, south of Brisbane, sold all their baby things last October after trying unsuccessfully for two years to have more children. A doctor had given Mrs Perry only a 5 per cent chance of having another child naturally.
Picture
Posted by The Man at 7:47 AM No comments: