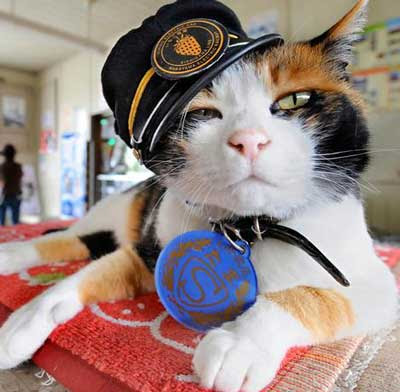 KINOKAWA, Wakayama -- The cat stationmaster of a railroad station here has been appointed as a corporate executive of the Wakayama Electric Railway Co., the company has announced.
The train operator has promoted 10-year-old female cat Tama, currently a stationmaster of Kishi Station on the Kishikawa Line, to the post of operating officer in recognition of her contribution to expanding the customer base.
This is the first time in the world for a cat to become an executive of a railroad corporation, a company official said. Tama will continue to serve as the stationmaster while assuming the new role.
The cat has climbed the ladder of success swiftly since she was first appointed as the stationmaster in January 2007. Tama was promoted to "Super Stationmaster" the following year and to corporate executive in a mere three years since her first appointment. Tama is officially introduced as an operating officer on the company's Web site.
Since the company took over operation of the Kishikawa Line from the Nankai Electric Railway Co. in 2006, annual users have increased by about 300,000 to some 2.2 million. As the company considers Tama has played an important role in increasing passenger numbers, it decided to reward the cat's contribution with accelerated promotion.
Some 100 fans visited the official appointment event on Sunday to congratulate the cat.
"Tama has also contributed to drawing public attention back to felines as dogs continue to enjoy greater popularity," said President Mitsunobu Kojima. The railroad company plans to rebuild Kishi Station into the shape of cat's face this summer.
As Tama has already gained 0.3 kilograms in the past three years, it refrained from accepting a hike in wages, which is paid in cat food.
.
Posted by The Man at 11:10 AM No comments: 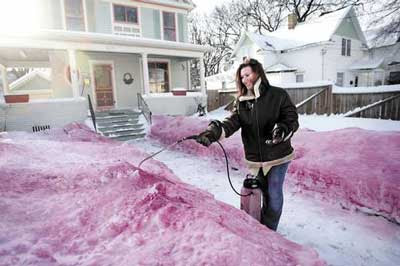 An environmental artist in Fargo, N.D., says she paints the snow on her home's yard a different color each time flakes fall.
While Fargo resident Stevie Famulari's front yard currently is pink, the landscape architecture professor at North Dakota State University is eyeing purplish blue snow for the next snowfall.
Famulari's color scheme, which includes darker colors as winter progresses, is intended to unveil a colorful rainbow when the snow finally melts.
"It'll be a beautiful rainbow when it comes back," she said. "Happily, I don't expect it to melt at the same rate so the front of the yard may reveal the pinks or the purples sooner, the back of the yard will still be the blacks and the blues."
Famulari said while some enjoy her colorful lawn and others are less supportive, it does serve as an intriguing conversation starter.
"Either way, it causes controversy and it causes people to talk and talking causes change," she said. "Like it or hate it, at least it's discussed."
.
Posted by The Man at 11:05 AM No comments:

Please Let Me In