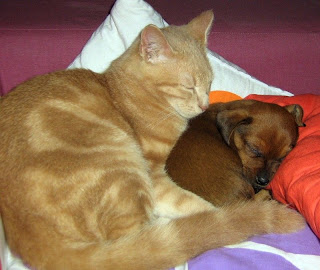 Here's a dog trained to blow bubbles
Posted by The Man at 10:33 AM No comments:

A suburban Chicago couple received a $9.5 million parking ticket for leaving their car in downtown Glencoe, Ill., for more than two hours.
Barbara and Lee Mitchell say the ticket explained they were entitled to a hearing on the matter or could plead guilty and simply pay the fine, The Glencoe News reports.
If they chose to forgo a hearing, the instructions advised them "do not send cash."
Deputy Chief Mike Volling of the Glencoe Police Department said he's at a loss to explain the ticket.
"Obviously somebody messed up when it was entered into the computer." He said.
The Mitchells say the dollar amount of the ticket, $9,501,071, coincides with the license plate of the car.
Posted by The Man at 10:27 AM No comments:

A crown made of friendship 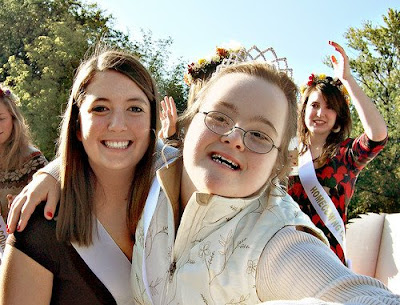 Girl with Down syndrome wins homecoming honor —and peers' respect.

Anne Jennings celebrates with a member of her court after she was named Libertyville High School 's homecoming Queen. (Family photo / October 18, 2008)
Now that she's royalty, Anne Jennings dances down the hallways, bursts into excited giggles and hugs her BFFs, or "best friends forever," without warning. Of course, she did pretty much all those things before being named homecoming queen at Libertyville High School, but somehow, life has become more magical.As a 17-year-old with Down syndrome, the senior "has been walking on air" since being crowned this month."Before, I was just plain me," said Jennings, selected by student vote out of 17 nominated girls. "When I was queen, it changed. It's amazing. Everyone loves me. I love me."Her mother's videotape of the Oct. 3 school assembly when her daughter was crowned says it all. After Jennings learned that she was among the top five members of the court, the video images began shaking. By the time the crown was placed on Jennings' head, the background noise boomed with the sounds of students cheering wildly.

By then, Ellen Jennings said, she had dissolved into tears, explaining why the video images bounce from floor to walls and back to her screaming, happy daughter."Amazing. Unbelievable," she said later. "You teach kids to do the right thing and treat people all like individuals, and look what happens."She credits the warmth shown by classmates to the years that Jennings spent in regular education classrooms, where she was taught through 8th grade. Since entering high school, Jennings has spent more time in separate special-education classes, but she has maintained friendships from early childhood.Megan Collins, 16, a junior, is among those who voted for Jennings."Once she was nominated, she was so happy and excited," Collins said. "I heard her say, 'I don't want people to vote for me out of pity' because of her challenges. I knew she would appreciate it more than the other girls."

Lauren Vogg, 14, a freshman, attended Adler Park Elementary School with Jennings. Today, Vogg and her friends volunteer for a program called Best Buddies that teams them with students with disabilities. She voted for Jennings."I think over the years, we have recognized her more as a high school student and not just a person with special needs," Vogg said.
Other Libertyville students started a Facebook group, "Annie Jennings for Homecoming Queen," that accumulated more than 300 members—something Ellen Jennings didn't discover until after her daughter was crowned."I was just blown away," she said.One person wrote on Facebook: "Annie has already won in my book! She is beautiful outside AND more importantly INSIDE."At school, Jennings is still glowing, said security worker Mike Dolan.Every day at 10:45 a.m., she returns from an off-campus work program, hops off a bus, enters the school and greets Dolan with a fist bump, which she calls "knuckles.""She has been walking on air," Dolan said.Jennings shares lunch, gym and keyboarding classes with the "normies," as she refers, with affection, to her mainstream peers. After graduating from Libertyville High next spring, she plans to enter Hawley Transition School in Mundelein, where she will learn independent-living skills such as how to manage money, use public transportation and keep a job.She hopes to attend college after that, and marry her boyfriend, who took her to the homecoming dance, she said. She relives that weekend every time she looks at the pictures, with her smiling in a black dress and shawl."The paparazzi took a lot of pictures," said Jennings, a Special Olympics athlete and fan of the Jonas Brothers. "We ate out at Lino's. I had to give a speech."For years Jennings has struggled with questions about what makes her different from others."She would ask, 'Why did God make me have Down syndrome?' " Ellen Jennings said, sitting near her daughter in the family's living room.Anne Jennings, exasperation in her voice, piped up: "And she has no answers to give me."Her mother paused, then replied."Your job is to figure out what your gifts are and what you have to contribute to the world," she said.In some ways, being named homecoming queen has changed the way Jennings thinks about Down syndrome, "that it's not the worst thing in the world that could happen to someone," Ellen Jennings said.
Her daughter agreed, saying that at first, high school was scary and sometimes boring."Now I know why," she said. "This was going to happen."
Posted by The Man at 10:22 AM No comments: