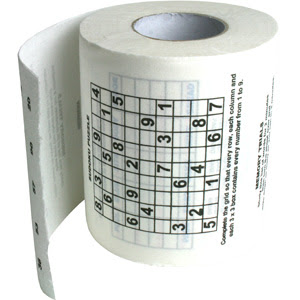 If you've forgotten to bring a newspaper with you and you're finding sitting in the bathroom a bit boring, I bet you wish that your toilet paper was covered in words, puzzles and games! Now, if only you had a pen!

The Mind Trainer Toilet Roll is sure to keep your mind occupied during those important times on your own in the bathroom - with 10 different games and puzzles to work your way through, you'll never want to leave!


http://www.drinkstuff.com/products/product.asp?ID=3356&title=Mind+Trainer+Toilet+Roll
Posted by The Man at 11:06 AM No comments:

A baby tiger abandoned by her mother in a Japanese zoo has found unconditional love in an unlikely neighbour - a French bulldog.The Bengal tiger, born last month in Kagawa prefecture, southern Japan, was first cared for by zoo-keepers after she was found stranded from her mother with no means for milk. But the squealing cub soon found motherly love in the zoo's two-year-old French bulldog, named Nana."Nana happens to have a strong motherly instinct," said Yuki Matsumura, keeper in charge of the baby tiger at the Shirotori Zoo. 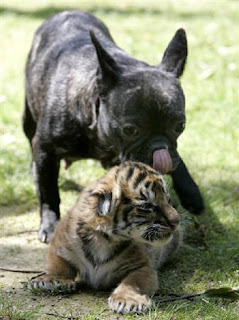 The dark-grey bulldog stops to lie still as the cub nudges its side to drink its milk. The bulldog, which recently gave birth to a still-born pup, may be thinking that the tiger is her real child."The baby tiger also seems to believe the dog is her real mother," Matsumura said. "She always asks the dog to breast-feed her by crying loudly."The two may have to part soon in a few months, however, since the 30 cm cub is growing fast.
Posted by The Man at 8:43 AM No comments:


· Think of how stupid the average person is, and realize half of them are stupider than that.
· Honesty may be the best policy, but it’s important to remember that apparently, by elimination, dishonesty is the second-best policy.
· The very existence of flamethrowers proves that sometime, somewhere, someone said to themselves, “You know, I want to set those people over there on fire, but I’m just not close enough to get the job done.”
· I put a dollar in a change machine. Nothing changed.
· So I say, “Live and let live.” That’s my motto. “Live and let live.” Anyone who can’t go along with that, take him outside and shoot the motherfucker. It’s a simple philosophy, but it’s always worked in our family.
· Don Ho can sign autographs 3.4 times faster than Efrem Zimbalist Jr.
· In America, anyone can become president. That’s the problem.
· The future will soon be a thing of the past.
· “No comment” is a comment.
· So far, this is the oldest I’ve been.

That dogs take their turn in front of fans. 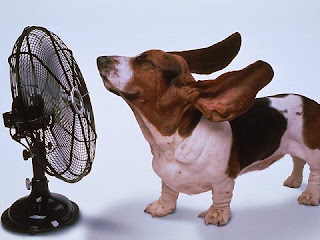 How do you carry a dozen eggs? 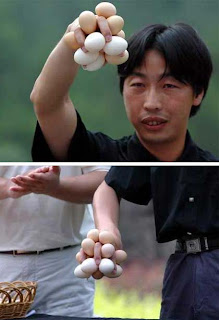 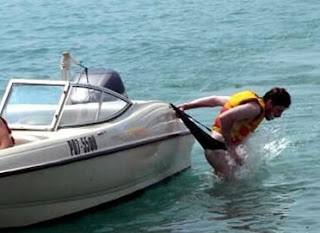