Check out this fun memory test:

A close-set pair of arches located in Arches National Park in Utah, USA. 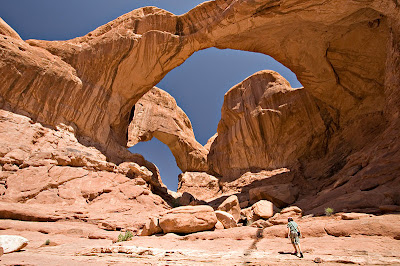 Sunrise at the South Pole

September 23, 1999: Every year about this time thousands of penguins rejoice to see the sun peep above the horizon in Antarctica. The return of the sun after 6 long months of chilly darkness means spring has arrived. For penguins it's time to shed a few pounds of blubber, find a mate, and bask in the sunshine for the next 6 months. For a small band of scientists and technicians who wintered over at the South Pole, it's time for supply drops, mail, and fresh fruit. Outside the temperature begins to climb from a frigid -70 deg. C to -25 degrees. Spring is in the air. What triggers this South Pole revolution? It's called the autumnal equinox.

The Automated Astrophysical Site-Testing Observatory near the US South Pole Station captured by a web cam just 2 days before 1999 autumnal equinox. The reddish-pink dawn sky presages the coming of a 6 month-long day. Click for images updated every 10 minutes. On the day of the equinox sunlight and darkness are of almost equal length. At the South Pole the sun rises, and at the North Pole it sets for six months.
Posted by The Man at 9:07 AM No comments:

Their friendship began half way across the world in Iraq, when St. Petersburg native Major Brian Dennis encountered a mixed breed dog in Anbar Province. The dog had been savagely abused and his ears cut off. The marine decided to call him Nubbs. Major Dennis nursed Nubbs back to health ... and here is where this friendship takes a remarkable turn: Major Dennis was ordered to move his squadron 70 miles away. He complied. 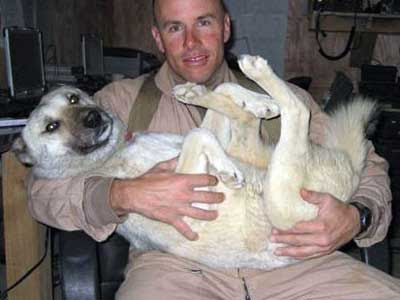 Two days later he was out there working on a vehicle in the front yard and all of a sudden along came Nubbs. He had tracked Brian 70 miles across the desert in 18 degree temperatures.
Despite strict rules, Major Dennis wrote to his mother, he had to help this dog. "I won't even address the gauntlet. He had to run off a pack of dogs, wolves and god knows what else to get here ... when he arrived he looked like he had been through a war zone," Dennis wrote. Weeks went by, and Nubbs was dealt another blow, someone told on them that they had the dog and they had 4 days to get rid of him or Nubbs was going to be shot. 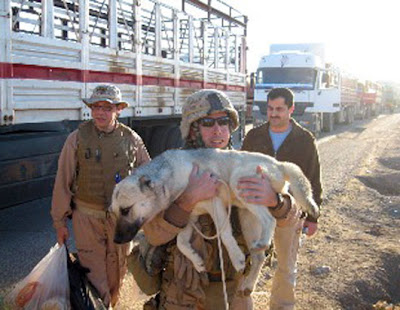 That’s when the Marine made it his mission to get Nubbs to safety. He wrote, “Nubbs was going to America, this dog had been through a lifetime of fighting war, abuse, and had tracked our team over 70 miles of harsh desert (and) was going to live the good life. The hardest part was getting him across the Jordanian border,” Cargo said. But, in keeping with the rest of this story, the duo defied the odds. Major Dennis was able to get Nubbs into Jordan. A family in the US will take care of him until these friends can be reunited. There's a photo gallery here.
.
Dog tracks soldier 70 miles in Iraq
Posted by The Man at 7:10 AM No comments:

Why They Sell Insurance

Amber Alert Issued in California After Kids Was Taken
Wednesday, February 13, 2008
Carson, Calif. — An Amber Alert was issued Wednesday for three children ages 9,11, and 12, after their biological parents took them at gunpoint from their foster ones during a supervised visit, MtFOXLA.com reported.
The biological parents believed to be driving a 2000 forest green Land Rover with the license plate number 5GKJ367, Los Angeles County Sheriff's Deputy Ruben Alvarez said.
Police said the mother has made previous threats.
Posted by The Man at 5:28 AM No comments:

Cat pulls a fast one on firefighters

It was the stereotypical firefighters-try-to-rescue-cat story, but with a twist. Firefighters from the South Florida city of Weston spent a sopping hour in pouring rain on Tuesday trying to extract a kitten squeezed in the undercarriage of a stranger's Volvo.
The crew tried jacking up the car and taking off a wheel, all for naught. The feline ducked out of reach at each attempt to grab it.
At some point, the cat escaped undetected, prompting the crew to spend another hour peering in bushes and scouring a Walgreen’s parking lot.
They finally gave up and headed back to the station, answering at least two more calls on their way. Five hours after the saga began, the elusive cat reappeared: At the station, in their fire truck's rear wheel well.
This time, firefighters used chunks of meatloaf to try luring it out. It was unenticed, so the crew resorted to an ultimately successful three-pronged strategy: One firefighter poked the feline in the backside with a Slim Jim, another used a hose to force it into an open compartment so a third person could pull it out. The feline was dirty but unharmed.
Posted by The Man at 5:24 AM No comments: