Ironing has been added to a list of punishments for young offenders to complete their community service orders.
A scheme in Wrexham has seen 14-17-year-olds ironing clothes donated to Salvation Army charity shops.
Wrexham Youth Justice Service (WYJS) said the project had been so successful there were plans to extend it.
One 16-year-old offender said he enjoyed giving something back to the community, but added: "I didn't tell any of my friends."
The offender, from Wrexham, added: "We had to collect clothes from the charity shop and then iron them to be sold.
"I did it for a couple of months. At first I thought 'This is mad.' I expected to be doing painting or something like that.
"But it wasn't that bad. It's about giving something back to the community.
"I didn't tell any of my friends because they'd probably all laugh. It's a girl's thing, isn't it?
"I've done some of my own ironing as well."
It said a common response among offenders was: "I'm not ironing, that's women's work."
Posted by The Man at 10:09 AM No comments:

Dad tells 5-year-old, 'You did the crime, you walk the line' 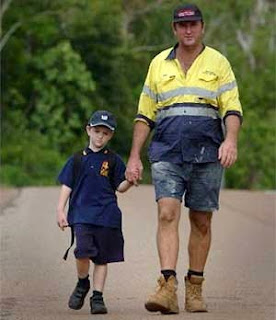 5-year-old boy was made to walk two-and-a-half hours to school.
A Northern Territory man has been making his five-year-old son walk two-and-a-half hours to school every day, after he was kicked off the school bus. When Jack Burt confessed that he'd been banned for five days for hitting the bus driver in the head with an apple core, dad Sam thought he should learn the hard way. He and Jack last week were getting up at 5.10am for the 13km-hike from the Darwin rural area of Herbert, all the way to Humpty Doo.
At the end of the old-fashioned punishment, Mr Burt, 38, took out a public notice in the Northern Territory News. "Jack Burt and his dad wish to thank all the kind people who stopped to offer them lifts in the past week," the ad read. "It's good to see a number of good people in the community. Jack hopes to be allowed back on the bus on Monday."
But in the battle of wills between tall and short, the smart money's on Jack. "Shame it didn't work," Mr Burt said. "He got back on the bus Monday, and within three stops he was in trouble again. I couldn't believe it. I don't understand - he's good at school, he gets awards all the time." So it was back on the road again the next day - with seven-year-old sister Caitlyn, who was fighting with Jack on the bus at the time, in tow.
Mr Burt, who owns a crash repair shop in Palmerston, has also been sacrificing his nights, working back late because his morning starts have been delayed. "But I'm doing it for a good cause," he said. However, a breakthrough might be in sight.
Posted by The Man at 9:52 AM No comments: