Teenager sleeps her life away - Literally

When 15-year-old Louisa Ball takes a nap, she doesn’t mess around. She sleeps for days on end, and no amount of shaking or prodding can fully wake her up.
Rare illness turns girl, 15, into ‘sleeping beauty’
But it’s no fairy tale; asleep for days on end, she has to be wakened to eat.
.
.
Posted by The Man at 7:19 PM No comments:

Man banned from carrying daughter on shoulders in Tesco 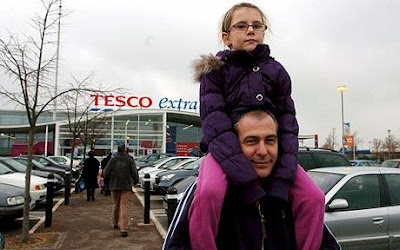 A father was banned from carrying his daughter on his shoulders during a shopping trip to Tesco.
Martin Dunkley was confronted by a security guard when he tried to enter a branch of the store in Cambridge.
The guard told the 45-year-old taxi driver to take six year-old Natalie down for health and safety reasons.
But he refused and decided to shop elsewhere.
A Tesco spokeswoman: "We take the safety of our staff and customers very seriously. Each store can make these decisions on an individual basis. We have no blanket policy on this issue."
The incident comes after other Tesco stores recently banned customers from wandering around stores wearing pajamas, then from going barefoot. Tesco ban on shoppers in pajamas
.
Posted by The Man at 7:12 PM No comments: