Miss Dolittle: The four-year-old girl who only speaks to animals

At four years old, she had never been able to say Mummy or Daddy.
Nor could Rose Willcocks tell her parents if she was hungry, tired or unwell after being left all but mute by an extremely unusual genetic condition.
But to her parents' astonishment, Rose has suddenly revealed she has a great deal to say for herself - but only to animals.
She began talking to cows during a stay at a farm which was part of her therapy. Her parents now say she turns into a chatterbox as soon as she is in the company of animals. 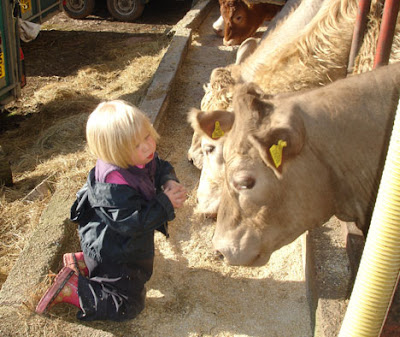 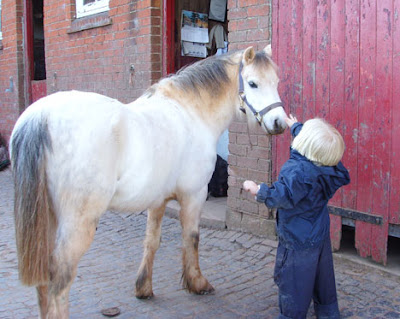 ... and 'talks' to a horse
The discovery has given them hope of improving Rose's condition.
Her mother, Esme, 37, who has nicknamed her daughter Miss Dolittle after the fictional doctor who could talk to animals, said: "She began to vocalize with the cows. We had never heard Rose vocalize before and we were overjoyed."
Rose has a chromosome defect which has left her with a floppy voice box and windpipe. She also has learning difficulties and autism.
Mrs Willcocks and husband Dave, 41, an IT administrator have another daughter, Ruby, two.
The family, from Bishop's Stortford in Hertfordshire, arranged a therapy placement for Rose and stayed at a farm.
"We went to see the cows," Mrs Willcocks said. "Suddenly, Rose perked up. I did a double-take as I struggled to take in what I was hearing. She wasn't actually saying words but there were no two ways about it - she was talking to a cow."
"There was something about animals that made Rosie connect. We could barely get her to make eye contact or moan or groan but here she was, chatting like an old friend to the cows and horses."
"Her affinity with animals amazes everyone. She changes from an introvert into a chatterbox." The family is planning to take Rose to the U.S. for therapy, involving swimming with dolphins, in the hope she will continue improving.
Her mother said: "If we can move her on just a fraction further then it will have all been worthwhile."

Here's something you don't see every day

Dog Rides Childs Toy Through Park
Posted by The Man at 10:11 AM No comments: 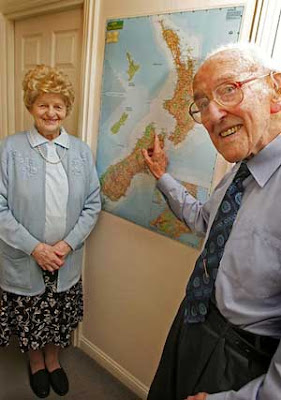 A Second World War veteran is emigrating to New Zealand today at the age of 102 because he thinks England is too crowded.
Eric King-Turner and his 87-year-old wife Doris will set out from Southampton on a 12,000-mile cruise taking them to their new life.
Mr King-Turner said: "It's a wonderful new adventure and I would say to anyone that if you want to do something you should do it straight away, while you can. "What's important is that when I'm 105 I don't want to be thinking, 'I wish I had moved to the other side of the world when I was 102'."
Posted by The Man at 10:04 AM No comments:

Two British Women Die From Identical Infection After Giving Birth on Same Day at Same Hospital
In what is being called more than a coincidence, two new mothers who gave birth at the same British hospital on Dec. 21 died afterwards from identical infections, The Daily Mail reports.
Within 72 hours both women died from complications linked to streptococcus A infection, which normally causes sore throats.
The Daily Mail identifies the women as Amy Kimmance, 39, and Jasmine Pickett, 29.
Click here to read the report at The Daily Mail.

Oregon Family Finds Bullet on Boy's Pillow, Hole in Bedroom Ceiling
A New Year's Eve slumber party nearly turned tragic for a Beaverton, Ore. family when a stray bullet pierced the roof of their home and landed on their son's pillow, KPTV reported.
Three children were sleeping on the floor in an upstairs bedroom of the home when the bullet ripped a 2-inch hole in the ceiling and landed just inches from the boy's head. Police responded to a 911 call at the house just after 2 a.m. Tuesday, after the family discovered the bullet, KPTV reported.
Click here to watch a video of this report at KPTV FOX 12.
According to the report, police believe the bullet was fired by New Year's revelers who discharged weapons into the air to mark the New Year. Though no one was injured, the family was shaken by the tragedy that could have been, KPTV reported.
Neighbors in the upscale area of West Beaverton told KPTV they heard banging and popping sounds, and said they were outraged that someone would fire a gun in the area.
Firing a gun in a neighborhood is illegal in Beaverton, and police warn residents not to fire guns on New Year's Eve each year, KPTV reported.
Posted by The Man at 10:01 AM No comments: