Elephant rescued from a ditch in India

Forest rangers in West Bengal’s Jalpaiguri District have rescued an elephant that had fallen into a ditch.
The elephant was passing through this route when it slipped and fell into the ditch. Some of the tea garden workers saw it lying there and informed the forest officials.
Later, the forest officials rushed to the spot with a crane and rescued the majestic elephant, believed to be around 11 years in age. The pachyderm was gently helped up by the crane.
After being pulled out of the ditch, the elephant instantly was up on its feet and without wasting a second fled from the spot towards the nearby forest.
"Now, it is healthy. We are feeling very nice. We have been able to save a beautiful animal," said Niranjita Maitra, Assistant Wildlife Warden, Jalpaiguri Range.
Over the past couple of decades, India has struggled to tackle the problem of shrinking wildlife that is attributed to encroachment by humans.
The conflict often ends with villagers killing elephants and wildlife experts say it is imperative to wean them away from wildlife habitats by providing them alternative livelihood.
Home to 50,000 wild Asian elephants a century ago, just 26,400 elephants were roaming India’s national parks and forests as per a census of 2002.
Worse, the first comprehensive elephant census published in 2005 showed a further steep drop in numbers to just 21,300 elephants.
A recent survey by the Ministry of Environment reported a steady depletion of forestland in 11 major wildlife reserves since 1997.
According to another survey, only 20 per cent of India’s landmass is forested and just 120,000 square kilometers — less than four percent of the country — of that is suitable for elephants.
.
.
Posted by The Man at 2:40 PM No comments: 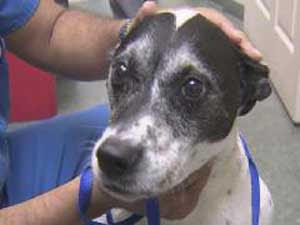 Last week, an 8-year-old mixed-breed named Diamond was rushed to a veterinary clinic in Miami with an alarming injury.
"She had licked a paper shredder in the house that was set on automatic," said Dr. Marc Wosar of the Miami Veterinary Specialists.
The shredder grabbed onto Diamond's tongue and pulled it deeper into the sharp blades.
"I think it's a big potential risk in the house," Dr. Juan Sardinas said.
Fortunately, Diamond's owners were home and responded quickly.
They disconnected the head of the shredder and carried it, with the dog's tongue still stuck inside, to Miami Veterinary Specialists.
"We anesthetized her first, then reversed the shredder off the tongue and assessed the damage," said Wosar. "There were a lot of lacerations to the tongue as well as a lot of bite wounds. In her panic, she'd also bitten her tongue."
It took more than a 100 stitches to repair Diamond's tongue. A portion that was too severely damaged had to be removed, but doctors expect her to make a full recovery.
"She just won't have a perfectly round tongue. She'll have a little nick in it," said Wosar.
Veterinarians recommend confining or crating animals when you're not home to keep them away from anything that might cause harm.
VIDEO
.
Posted by The Man at 2:32 PM No comments: 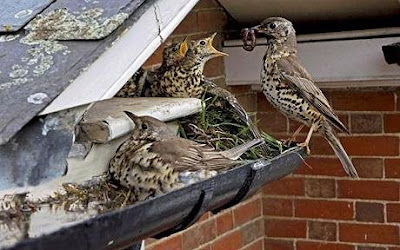 A bird used her body as a dam to stop overflowing drainpipe water from soaking her chicks.
The Mistle Thrush had built her nest on top of a downpipe, blocking the water's passage and causing the gutter to flood.
But desperate to protect her young, she puffed herself up to twice her size and sat in the drainpipe to stop the tide of rain water swamping the nest.
She was so occupied with her task that her mate was left to feed her and their young.
The images were captured by amateur wildlife photographer Dennis Bright at a house in Fareham, Hampshire.
Mr Bright said he was astounded by the female bird's behavior.
"The nest was tucked away from the weather in the shade of the roof but it was so close to the downpipe the gutter flooded when it rained.
"It was only a matter of seconds before the pipe flooded, and water cascaded over the sides."
Mr Bright said he was amazed by the bird's ingenuity.
"She had to come up with a solution so she puffed herself up so she was twice the size of her mate and used her body as a cork to stop the water - it was absolutely amazing.
"She was very dedicated, sitting there even when the rain was hammering down. Then every half an hour she would get out, dry herself off and come back.
"The male was doing most of the work - feeding her and the chicks when she was sitting in the pipe. I feel so lucky to have witnessed something so rare and unique."
Hester Phillips, from the RSPB, said she had never seen such a situation.
"We've heard of them nesting in some unusual sites before, namely on the top of traffic light, but we've certainly not come across anything like this before.
"Birds can be amazingly hardy creatures, their endurance is incredible - especially when protecting their young."
.
Posted by The Man at 2:28 PM No comments: