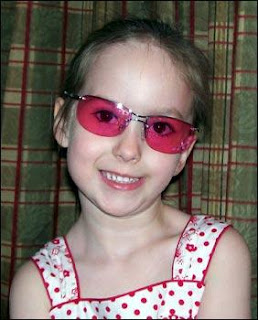 June 3, 2007
By EMILY CHRISTENSEN, Courier Staff Writer
WATERLOO, IOWA--- This summer Madison Shock is hosting her first sunglasses party.
To attend, everyone must bring the 5-year-old girl a pair of sunglasses. It may not seem like much to most little girls, but the brightly colored glasses are important to Shock.
This will be the first summer she can actually wear them.
Shock was born with microtia, a congenital malformation of the external and middle ear. Her right ear is fine, though her hearing is limited, but on the left side Shock was born with what her parents call a "little ear." The middle ear, which controls hearing, is underdeveloped, which means Shock is deaf on the left side. Madison was also born with first and second branchial arch syndrome, which causes the cheek and jaw bones on one side of the face to be smaller.
"We had no idea about any of this when she was born," said Shock's mother, Candace.
Doctors said the only way Madison could have an ear was a painful series of surgeries that required doctors to remove a piece of her rib bone to shape a new one. Then, she would be burned on her legs and that skin would be used on the new ear.
Candace and Brian Shock were not taken with that idea at all. A little research cemented their resolution against the surgeries.
"We figured if she wanted to do it when she was older then it would be her decision," Candace said.
They were resigned to let Madison continue with life as she was. And she didn’t seem to mind. Sure, kids asked questions, but Madison was quick to tell them that God just made her special. Usually, that was the end of the conversation.
Madison was only a toddler when Candace first saw a segment on the Oprah Winfrey show about a former CIA disguise specialist who now designs custom prosthetics. Candace put the thought out of her mind until a few months later when she saw another program about the same specialist on The Learning Channel (TLC). At last there was a small glimmer of hope.
At the time, Madison was too young to work with Robert Barron, who retired from the CIA in 1993.
And even though Madison was "proud of her little ear," Candace and Brian both understood that there would likely come a time when other kids weren't so kind about the difference. Candace went on a personal mission to find Barron, who now owns Custom Prosthetic Designs in Ashburn, Va.
"I did a Yahoo! search and came up with 15 Robert Barrons in that area. I called every one until I finally found him," Candace said.
Barron wouldn't see Madison until she was 5 years old, so they waited.
This March they began the process of getting Madison fitted for her new ear. They went back again earlier this month so Barron could fit the silicone prosthetic and hand paint it to match Madison's skin.
Janice Little, Madison's grandmother, said the entire experience was emotional for everyone.
"(Madison) looked at me and would ask why I was crying," Little said. "I had to explain it wasn't an unhappy cry, but a very happy one. It was unbelievable."
The ear is not permanently affixed to Madison's head. It can be attached with secure adhesive that will withstand swimming or even rough play. And when she isn't wearing it, the ear is kept secure in a small plastic container.
In a few years the Shocks will have to return to Barron's office so Madison can get a new prosthetic. Estimating for regular wear and tear, Candace said the ear would only last three to five years.
The process is expensive. The Shocks estimate they spent about $10,000 on just the medical side of the process and another $5,000 for each additional replacement. Barron accepts cash only, not insurance. People can submit the cost to their insurance carriers for reimbursement.
The Shocks say it is worth every penny.
"I think it will help her tremendously with self-esteem and feeling good about herself," said Charlotte Shock, Madison's grandmother. "And he was so kind and caring and patient. After he was done and placed the ear on her head, he was as excited as the rest of us."
http://www.wcfcourier.com/articles/2007/06/03/news/metro/8cac31114f7c3d9a862572ef0010f9e3.txt