Do you know Christmas

Click Here
How well do you know Christmas?
Or Here
Here’s another quiz about Christmas Carols.
Posted by The Man at 12:48 PM No comments:

Getting together for Christmas

A man in Des Moines calls his son in Los Angeles the day before Christmas and says, 'I hate to ruin Christmas this year, but I have to tell you that your mother and I are divorcing; forty-five years of misery is enough.'

'Dad, what are you talking about?' the son screams. 'We can't stand the sight of each other any longer,' the father says. 'We're sick of each other, and I'm sick of talking about this, so you call your sister in Denver and tell her.'

Frantic, the son calls his sister, who explodes on the phone. 'Like hell they're getting divorced,' she shouts, 'I'll take care of this.' She calls her parents immediately, and screams at her father, 'You are NOT getting divorced. Don't do a single thing until I get there. I'm calling my brother back and we'll both be there tomorrow. Until then, don't do a thing, DO YOU HEAR ME?' and hangs up.

The old man hangs up his phone and turns to his wife. 'Okay,' he says, 'they're coming for Christmas and paying their own way.'
Posted by The Man at 7:29 AM No comments: 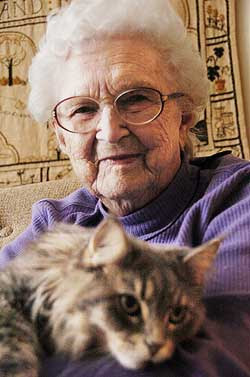 92-year-old reads her own obituary
Anne E. Hathaway was somewhat shocked Friday when a friend called to see if she was still alive.
The Orono resident’s obituary had appeared in Friday’s Bangor Daily News. The information in the short obituary and the list of death notices was correct, except for the part about her being dead. The deceased was actually Ann Hathaway of Bangor.
Both women had made advance funeral arrangements at the same funeral home. When pulling the file for the deceased Ann Hathaway, the funeral home employee didn’t realize there were two women with very similar names and grabbed the wrong one.
At 92, Hathaway admits she’s no spring chicken but said that she’s not dead yet "I just laughed," Hathaway said. "I went to the pearly gates and opened the door and they didn’t have any strawberry shortcake and they didn’t like the way my hair looked."


Widow takes her husband's ashes to NFL game?
Richard Desrosiers never made it to Heinz Field to watch his beloved Steelers play football, but his widow helped him fulfill his dream in death. Thanks to some help from sympathetic donors, Kathleen Desrosiers attended Sunday's game, bringing an urn with some of her late husband's ashes, as well as his ring and two pictures of him. He had died in March of a brain tumor.
Though he lived in Exeter, N.H., Richard Desrosiers adopted the Steelers at an early age and followed them closely. He named his dog Steeler and his wardrobe, by his widow's estimate, was 95 percent Steelers gear. Desrosiers was covered with a Steelers blanket when he died, and at his funeral, his two stepsons honored his memory by donning Steelers jerseys. » Article here
Posted by The Man at 7:24 AM No comments: