Alabama Sheriff Locked in Own Jail
A federal judge ordered an Alabama sheriff locked up in his own jail Wednesday after holding him in contempt for failing to adequately feed inmates while profiting from the skimpy meals.
U.S. District Judge U.W. Clemon had court security arrest Morgan County Sheriff Greg Bartlett after dramatic testimony from skinny prisoners about paper-thin bologna and cold grits. The hearing offered a rare look into Alabama's unusual practice of letting sheriffs pocket money left over from feeding inmates.
The sheriff, who showed no emotion when his arrest was ordered, had testified that he legally kept as personal income about $212,000 over three years with surplus meal money but denied that inmates were improperly fed.
Clemon, however, said the sheriff would be jailed until he comes up with a plan to provide the 300 jail inmates with nutrionally adequate meals, as required by a 2001 court order.
Defense attorney Donald Rhead said Wednesday night that he faxed Clemon a proposal and hopes Bartlett will be quickly released. The sheriff had no comment as he was led from the courtroom.
At the hearing, 10 prisoners told Clemon meals are so small that they're forced to buy snacks from a for-profit store the jailers operate. Most of the inmates appeared thin, with baggy jail coveralls hanging off their frames.
Some testified they spent hundreds of dollars a month at the store, which Bartlett said generates profits used for training and equipment.
Inmates told of getting half an egg, a spoonful of oatmeal and one piece of toast most days at their 3 a.m. daily breakfast. Lunch is usually a handful of chips and two sandwiches with barely enough peanut butter to taste.
"It looks like it was sprayed on with an aerosol can," testified Demetrius Hines, adding he's lost at least 35 pounds in five months since his arrest on drug charges.
.
Woman dialed 999 with crossword clue
Police sent a caller off with more than just a cross word when she dialed 999 to ask for the answer to five down.
The angry officer, in Grevenbroich, Germany, spelled out that clueless caller Petra Hirsch would be facing a charge of wasting police time if she didn't clear the line.
Hirsch said: "I had finished the crossword except for this one answer and I was totally stumped. I had looked all over the internet and asked friends. It was really bothering me.
"The clue was for the full name of a police border protection unit so I thought they would not mind helping and I called the hotline - but they were really rude.
"All I wanted was a bit of help and it would only have taken them a second to tell me the answer but instead I got told to get off the line."
A police spokesman said: "It is called an emergency number for a reason - to deal with emergencies. Crossword solutions are not an emergency."
.
Mother cooks Christmas dinner - after giving birth earlier in the day
A Cornish woman gave birth at home on Christmas morning - then got up five hours later to cook her family a Christmas dinner.
Karen Holmes, 36, a personal trainer, gave birth to a 7lb 4oz son, Samuel, at 7:43am, reports the Daily Mail.
Her partner Alan Strange, 42, and daughters Ellie and Mia would have been happy to postpone their main festive meal until Boxing Day to give her a rest.
But by midday, Miss Holmes was up and about - and decided to get cooking a traditional festive dinner with all the trimmings.
"I spent half the day in bed then got up and cooked the dinner," said Karen, from Trethurgy.
"It was not bad as far as births go but it still wasn't easy. I thought perhaps once I'd had him
.
Convict prefers jail to parents
A jailbird released early with an electronic tag has begged to go back to jail - because he can't stand living with his parents.
Convicted thief Guido Beneventi, 30, had his sentence reduced on condition that he stayed at his mum and dad's home in Palermo, southern Italy.
But he said that his parents constantly lectured him about his life of crime and then began ordering him around "like a child" and telling him to clean his room.
After a string of rows, he broke his curfew to flee to police headquarters and demanded to be arrested.
"You are my saviors," he told them as they sent him back to Ucciardone jail. "I just couldn't take another day with them.
"They spent all their time telling me how useless he was and lecturing me about everything and ordering me to do housework. It was like being a child again. Prison was better."
.
Posted by The Man at 12:56 PM No comments: 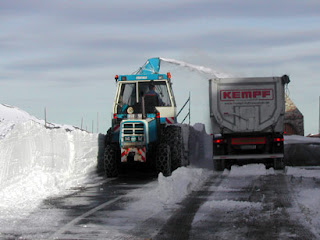 Cash strapped Alpine farmers are raking in a fortune harvesting snow and selling it to desperate ski slopes
Despite a freezing winter, snowfall levels at lower altitudes are down and Austrian resorts have had to buy in trailer loads of the stuff from higher up the mountains.
Across the country, thousands of tonnes of snow have been dug up from high Alpine ski fields and shipped to keep ski pistes open.
In Austria the biggest "snow harvesters" are the owners of the Grossglockner Hochalpenstrassen AG (GroAG), a 40-mile stretch of road 8,200 feet above ski level which is Europe's highest Alpine crossing.
GroAG spokesman Dietmar Schondorfer said: "Even if it doesn't snow, every day we have tonnes of snow dumped on the road by the wind, all we have to do is drive back and forward to scoop it up.
"We have received calls from as far away as Thueringen in Germany which is hundreds of miles away to order snow. We even had to make a delivery to Legoland in Guenzberg, Germany, that is 500 miles away."
.
Posted by The Man at 12:51 PM No comments:

Dalmatian gives birth to 18 puppies a year after delivering 16
Three-year-old Button is the daughter of one of the dogs who appeared in the Disney film sequel, 102 Dalmatians.She gave birth to the litter by Caesarean section on December 23, to the amazement of her owners Adam and Nicola Morley and their three sons.
Mrs Morley, from Melton Mowbray, said: "It was a big shock. They are all doing well but we're only going to keep one of the puppies. It's a lot of work looking after them all."
A Dalmatian dog has earned her spots with a record-breaking litter of 18 puppies.Button, who is the daughter of one of the dogs that starred in Disney's 101 Dalmatians remake, is getting a little help with feeding her offspring from her owners.
Anthony Bartram visited the home of the Morley family in Leicestershire to see how she, and her pups, were getting on.
.
.
.
Posted by The Man at 12:44 PM No comments:

Aka Barack Obama Armed Limo/Tank
.
Posted by The Man at 8:34 AM No comments: