Automobile service reminder
A penny postcard from 1928, detailing repairs for the Model T. 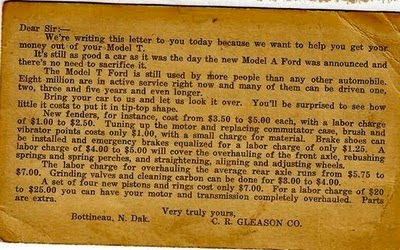 Here’s what the postcard says:
.
Dear Sir-
We are writing this letter to you today because we want to help you get your money out of your Model T.
It’s still as good a car as it was the day the new Model A Ford was announced and there is no need to sacrifice it.
The Model T Ford is still used by more people than any other automobile. Eight million are in active service right now and many of them can be driven one, two, three and five years and even longer.
Bring your car to us and let us look it over. You’ll be surprised to see how little it costs to put it in tip-top shape.
New fenders, for instance, cost from $3.50 to $5.00 each, with labor charge of $1.00 to $2.50. Tuning up the motor and replacing commutator case, brush and vibrator points costs only $1.00, with a small charge for material. Brake shoes can be installed and emergency brakes equalized for a labor charge of $1.25. A labor charge of $4.00 to $5.00 will cover the overhauling of the front axle, rebushing springs and spring perches, and straightening, aligning and adjusting wheels.
The labor charge for overhauling the average rear axle runs from $5.75 to $7.00. Grinding valves and cleaning carbon can be done for $3.00 to $4.00. A set of new pistons and rings costs only $7.00. For a labor charge of $20.00 to $25.00 you can have your motor and transmission completely overhauled. Parts are extra.
.
Posted by The Man at 2:26 PM No comments: 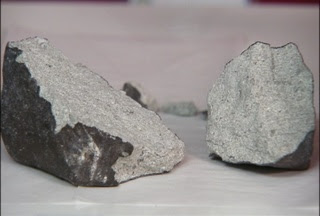 When Lawrence Reese was cleaning up his sub shop in Lorton, Virginia, late Monday afternoon, he heard a tremendous impact outside.
"Loud. Loud enough you could hear it, maybe, a block or two away," recalls Reese. "I'm surprised it didn't break our glass. That's how loud it was."
Something had come hurtling out of the sky, and crashed through the roof of a nearby doctor's office, landing in an empty examination room.
"I thought something fell in Dr. Gallini's office," explained his partner, Dr. Frank Ciampi. "I thought a bookshelf fell on him, so I ran out and saw that he was okay. And then I looked to the left and saw the debris in the hallway."
The debris was smoldering and metallic. The two physicians puzzled over the items. Whatever had come through the roof had broken into several pieces. The two doctors speculated that part of an airliner had come off and fallen through their roof. A nearly circular hole was punched through the building's roof.
An acquaintance suggested the possibility of a meteorite, so the debris was sent to the Smithsonian's Natural History Museum in nearby Washington, D.C.
"It's definitely a meteorite," concluded Linda Welzenbach, who oversees the museum's collection of natural space objects. "It has a black fusion crust which tells us that it's passed through the atmosphere."
Most meteorites are small -- about the size of a pea. The one that landed in Lorton was bigger than a human fist, before it broke into pieces inside the doctors' office.
.
Posted by The Man at 2:02 PM No comments: 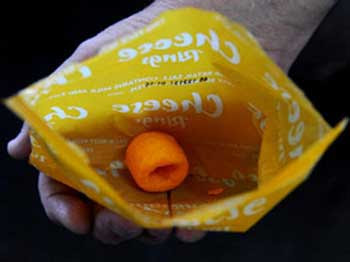 Brits think bacon comes from sheep
A survey of British youngsters suggests 26 percent of the country's under-16 population erroneously believe bacon comes from sheep.
The survey of 800 children and adults, conducted for the Home Grown Cereals Authority and the National Farmers' Union, also suggests 29 percent of youngsters believe oats grow on trees and 17 percent of both children and adults are under the false impression that eggs are a necessary ingredient in bread, the Daily Mail reported Thursday.
"Everyone should know where primary foods like cereals are grown and the role they play as part of a healthy, balanced diet," said Peter Kendall, president of the National Farmers' Union. "More than half the food consumed in the U.K. is produced on British farms, yet the public, and especially young people, are unable to make this connection."
.
12-year-old girl drives grandpa to help
A North Carolina man says he will reward his 12-year-old granddaughter with her own car for driving him more than a dozen miles for help when he fell ill.
George Scheuering of Ramseur, N.C. who has diabetes, said his granddaughter Anna, who he had given driving lessons, insisted on taking the driver's seat when he began feeling dizzy and faint during a drive through the mountains of West Virginia with the girl and her brother Zak.
"So we got halfway up the mountain and I told him to pull over and I was going to drive, and he let me drive," Anna said Tuesday.
Anna said she and Zak were eventually able to raise their father on their phone and he helped them find a gas station about a dozen miles away from where she began driving. The station clerk called an ambulance for Scheuering.
The grandfather, who spent six days in a hospital, said doctors told him he might have slipped into a diabetic coma if he hadn't gotten help so quickly.
Scheuering said Anna will receive her reward when she is old enough to legally drive.
"Well, when she starts high school, I told her she would have a car," he said.
.
It was no joke at security gate
In the tense new world of air travel, we're stripped of shoes, told not to take too much shampoo on board, frowned on if we crack a smile.
The last thing we expect is a joke from a Transportation Security Administration screener - particularly one this stupid.
Rebecca Solomon is 22 and a student at the University of Michigan, and on Jan. 5 she was flying back to school after holiday break. She made sure she arrived at Philadelphia International Airport 90 minutes before takeoff, given the new regulations.
She would be flying into Detroit on Northwest Airlines, the same city and carrier involved in the attempted bombing on Christmas, just 10 days before. She was tense.
What happened to her lasted only 20 seconds, but she says they were the longest 20 seconds of her life.
TSA worker pulls a baggie of white powder from a passenger's laptop bag and asks where she got it. She's in a panic. Then he tells her it was just a joke.
.
Posted by The Man at 1:52 PM No comments: