Aged 15 years, Jyoti Amge is just 1ft 11 in tall.The teenager, who is the world's smallest girl according to the Indian Book of Records, has a form of dwarfism called achondroplasia. Now fully grown, she weighs just 11 lb. Far from being unhappy about her tiny size, Jyoti says that she enjoys the celebrity status her height has brought her. I am proud of being small. I love the attention I get." 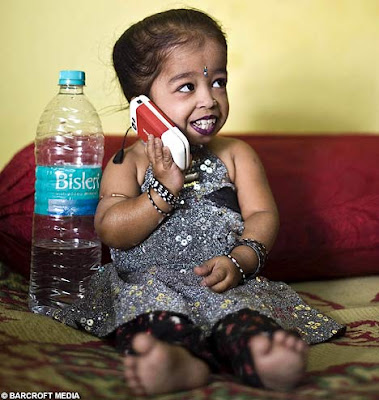 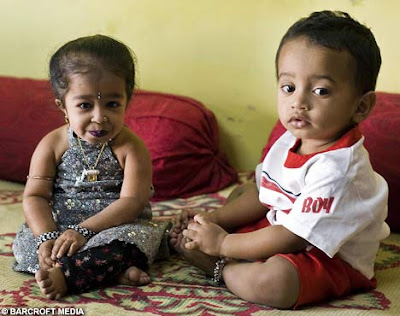 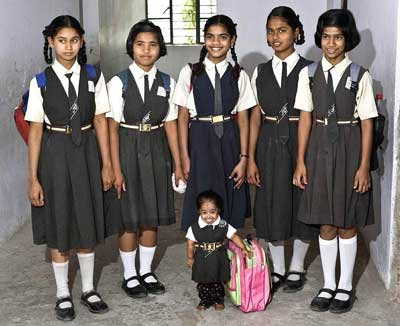 "I'm just the same as other people. I eat like you, dream like you. I don't feel any different." Jyoti attends her local high school, in Nagpur, India, where she studies alongside classmates of her own age, though she sits at a specially made miniature desk. Like any other teenager, she loves listening to pop music and watching DVDs and even hopes to become a Bollywood actress. She has recently recorded an album with her favourite Indian pop star, Mika Singh. There are more photos here.

'The Grid' Could Soon Make the Internet Obsolete

The Internet could soon be made obsolete. The scientists who pioneered it have now built a lightning-fast replacement capable of downloading entire feature films within seconds.
At speeds about 10,000 times faster than a typical broadband connection, “the grid” will be able to send the entire Rolling Stones back catalogue from Britain to Japan in less than two seconds.
The latest spin-off from Cern, the particle physics centre that created the web, the grid could also provide the kind of power needed to transmit holographic images; allow instant online gaming with hundreds of thousands of players; and offer high-definition video telephone for the price of a local call.
David Britton, professor of physics at Glasgow University and a leading figure in the grid project, believes grid technologies could “revolutionize” society. “With this kind of computing power, future generations will have the ability to collaborate and communicate in ways older people like me cannot even imagine,” he said.
The power of the grid will become apparent this summer after what scientists at Cern have termed their “red button” day - the switching-on of the Large Hadron Collider (LHC), the new particle accelerator built to probe the origin of the universe. The grid will be activated at the same time to capture the data it generates.
Posted by The Man at 12:48 PM No comments:

Labels: In the News, Internet, Technology 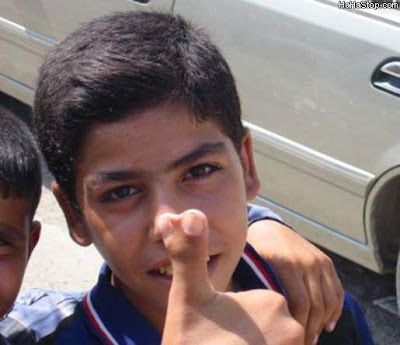 A German has been dubbed "the man with the bottomless stomach" as he binges on over 12,000 calories a day without gaining an ounce in weight.

Heinz Asthoff was struck with an incurable hunger following the death of his wife 22 years ago.

His incredible ability to eat endlessly without getting fat has been the subject of scientific studies and a TV program in his homeland.

On any given day he will eat a 2.2lb chunk of leberkase meat loaf, 5lb of potatoes, a dozen eggs, a pint of mayonnaise, pizzas, chips and sometimes as many as 20 meat patties.

He has even been advised by his doctors not to give up his 40-a-day smoking habit because he would eat more.

The trouble is that Heinz, 68, from Offenbach, is spending more on food than he has pension money. "Something has to give," he said.

"Nothing I eat makes me satisfied and I don’t put weight on.

"I can't eat out anymore. Last time I went to a pub I ordered a potato pancake and ended up eating 100 of them. I can't afford it."

He is nearly six feet tall and weighs 15 stone. "My doctors say my stomach is like the mine I worked down for 36 years – black and bottomless," he said.

Doctors confess that they have no idea why his metabolism demands so much food.

After eating a 2lb chunk of meat he is hungry again 15 minutes later but tries to slow down his eating by smoking more.

He lost his devoted wife, Minna, 22 years ago to cancer – the event, he says, which triggered his bizarre eating syndrome.

"But I really started eating in a crazy way about 14 years ago," he said.

"Nothing satisfies me, nothing. I never feel full."

His doctor Henning Huesch said: "He does not have especially high cholesterol, is not physically ill through eating, but it clearly addicted to it."

Mr Asthoff is to undergo more tests at a university clinic near his home next month.
Posted by The Man at 12:44 PM No comments:

They turned a little league baseball game in Hermosa Beach, California into a major league event.
.

.
What an awesome experience for the kids and their parents.
Posted by The Man at 12:03 PM No comments: