Face Of The Day 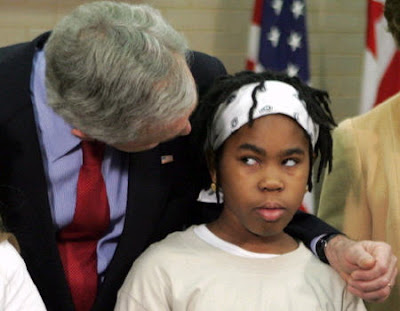 Jack Frost turned a car into a work of art 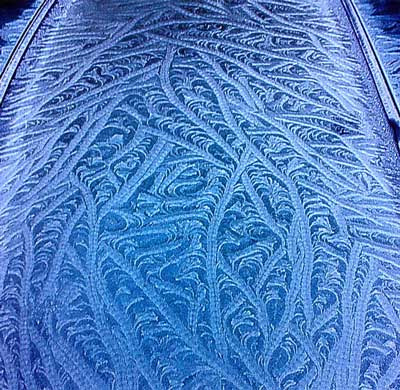 There are more images here. 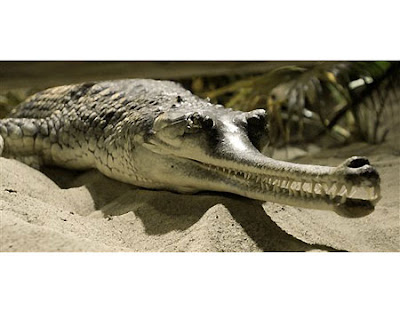 Mystery Surrounds Rare Reptile Deaths
Scientists scramble to determine what killed
50 critically endangered gharials in sanctuary in India.
.
LUCKNOW, India
Conservationists and scientists scrambled Tuesday to determine what has killed at least 50 critically endangered crocodile-like reptiles in recent weeks in a river sanctuary in central India.
Everything from parasites to pollution has been blamed for the deaths of the gharials — massive reptiles that look like their crocodile relatives, but with long slender snouts.
The bodies, measuring between five and 10 feet long, have been found washed up on the banks of the Chambal River since early December, according to conservationists and officials.
• Click here to visit FOXNews.com's Natural Science Center.
Posted by The Man at 4:03 PM No comments:

I don't think this cat wants to go indoors


A bird having perching problems
Posted by The Man at 3:58 PM No comments:

We all have seen this picture, some people over and over.
Do you know how it all started? 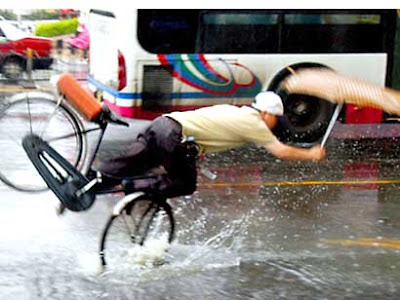 Photographer Criticized - May 2005
A photographer has come under fire in China for his pictures of a man falling off a bicycle.
The man became a spectacular cropper in Xiamen city after his bike hit a pot-hole submerged in rainwater. But photographer Liu Tao was accused of lying in wait to take his pictures instead of warning people of the danger. 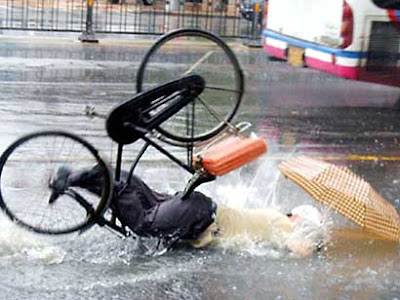 Readers of the Beijing Youth Daily, which published the shots, wrote in to express their feelings.
One wrote: "The pictures are well shot, but the person who shot this is disgusting. He knew there was a pit, but was waiting there for someone to fall over." 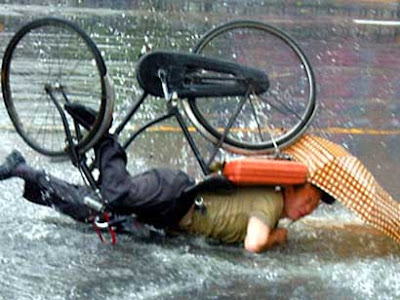 And another said: "The photographer should really be condemned since he knew there definitely would be other victims." Liu defended himself, saying: "I just knew that the city government has paved the pit, and without my pictures, the pit would not be noticed by the government, and there would perhaps be more people falling over."

In 1989, Vicki Armstrong started saving every single penny she had. Literally. Every little copper-colored coin she came across, she kept, even if a bill came to just 26 cents. "I would give them a quarter and a nickel so I would get four pennies back." Today, Armstrong is taking about 55,000 pennies to the bank.
"People always told me how wealthy I was going to be," the Shreveporter said. She knows 550 new dollars won't make her rich, but the symbolism reinforced frugal spending habits. "It helped me be a little bit more conservative in my lifestyle." For almost 19 years, Armstrong has been storing them in vases, bowls and the occasional shoebox. In 1993, The Times reported she had squirreled away 14,000 pennies. Armstrong resisted the temptation of cashing them in and kept saving.

She plans to retire at the end of the year from Christus Schumpert Highland Hospital, where she works as a maternity technician. Her co-workers and friends have chipped in over the years. "They all hand over pennies generously."

Armstrong's husband, Melvin, said he's never interfered with her healthy obsession and confessed that even their bicycle rides have been interrupted by tiny treasure hunts. "She would see a penny in the road and just stop. I would have to do circles just to let her catch up." Vicki Armstrong is unsure what she'll do with the extra money — deposit it or buy a nice bracelet she's always wanted.
Posted by The Man at 3:43 PM No comments:

Most people eat with them. Some people play them. But Joe Allison is a bit different.
He balances spoons on his face. The nine-year-old is so skilled at it that he has his sights set on a world record attempt.
He began his hobby two years ago when his cousin encouraged him to try it and he now spends hours practicing every day. 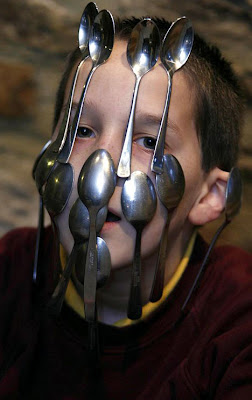 Balancing act: Joe Allison displays the skill he's been practicing for two years
Joe can now hang 14 off his face - four from his forehead, one from his nose, mouth and chin, two from each cheek, two from his right ear and one from his left.
He is now aiming to beat the world record of 15 spoons set by 16-year-old Tim Johnston in California in 2004.
At the family home in Totnes, Devon, Joe's mother Fenella said: "I've tried it and I can't do it. His brother's tried it and he can't do it either.
"It must be something to do with his skin type. It seems to help if you have greasy skin which is why children are quite good at it."
Joe is preparing to appear on the TV show Britain's Got Talent - where he will balance the spoons and do a little jig.
But rather than going stir crazy with fame, the schoolboy wants to keep a level head and admitted: "Even my friends haven't seen me do it yet."
His mother added: "We've tried lots of spoons over the last two years.
"Ikea seems to sell the best ones for hanging off your face. I think we're their best customer when it comes to spoons."

With legs the size of lollipops and standing no bigger than the average Coke can, this tiny canine is the smallest dog in the world.
The dog, named Heaven Sent Brandy, a four-year-old female Chihuahua measuring 15.2 cm (6 inches) from tail to nose, was awarded the title of "the smallest dog in terms of length" by the Guinness Book Of Records in January 2005.
And such is Brandy's size that in the three years since he was awarded the title, she hasn't grown - in fact, she is so small that she can't even bark. 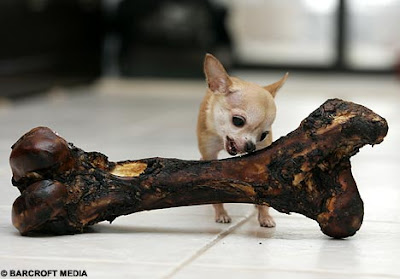 Bite-size: Brandy tucks into a bone she is unlikely to ever finish
Read more...
11-stone dog rescued from cruel owners sheds HALF his bodyweight
Her owner, Paulette Keller from Largo, Florida, USA picked up Brandy when she was just 9 months old.
"She hasn't grown at all and she weighs only 2lb," says the 53-year-old housewife.
"When I got Brandy, I had just lost my previous Chihuahua who was 14 years old. 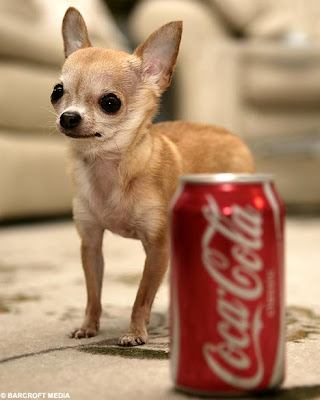 As big as a Coke: Brandy stands barely taller than a regular drink can
"I spoke to a breeder who I had met at a dog show the year before and she told me about Brandy.
"She said that she was so tiny that she wouldn't be bred but when I saw her, I just fell in love with her."
Brandy's fragile frame and tiny lungs have meant that she has never barked.
"With a dog like this, you have to be very careful. She can't jump on to or off anything because her legs are so tiny," says Paulette.
"Walking her is OK but when there are kids around, all they want to do is pick her up and she can get frightened.
"I have even managed to take her on domestic flights without being noticed. I have a small bag that she can slip into and, because she doesn't make a sound, no-one notices her. 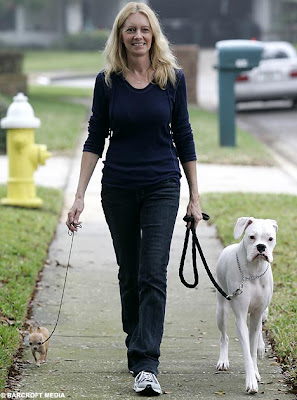 Out for a walk: Brandy is not much bigger than her owner's training shoe
"I have taken her to Seattle, Chicago, New York, Nevada - when we are on the plane, I just take her out and place her underneath my seat. No-one has any idea she is there."
Brandy lives with Paulette, her husband Bryan, 62, daughter Jessica, 23 and son John, 25.
As well as being given free run of the house, Brandy also shares the home with one-year-old boxer, Tyson.
"She has a kennel and a bed that she shares with Tyson, and they get on great," says Paulette.
"She is so small, she can fit through the small gaps in a wire fence but she knows to stay where she is.
"She is really lively and she will run around the house. Sometimes I can't find her and I get very scared but she will often just turn up hiding under the couch."
Due to her size, Brandy has a strict die of dry dog food - the smallest Paulette can get - and mashed-up scrambled egg because she can't fit whole pieces in her mouth.
As well as feeding Brandy, washing her can also prove to be a delicate operation.
"I have to wash her in the sink and I have to be very careful not to be too rough with her and her ears," says Paulette.
"Brandy is very healthy - she came from a breeder who breeds show-quality animals.
"But Brandy was a fluke. She came from a litter of five and when she was born, she was just miniature.
"When she was only one, she had rabies shot and she nearly died because of the reaction she had to it."
Despite the media attention that has seen her and Brandy appears on the Oprah Winfrey show, Paulette insists she had no idea Brandy would become so famous.
"When I first laid eyes on her, I thought 'wow' - I had never seen a dog so small," she says.
"Nine months later, the breeder phoned me and said I should look at the Guinness Book Of Records because she thought Brandy was smaller than the world's smallest dog.
"I got the application form and filled it out and then a few months later I got a call from the Guinness people who confirmed she was the smallest.
"Everything changed after that and Brandy and I went on Good Morning America, Oprah and The Jay Leno show.
"It was amazing but I would have never had picked Brandy to get famous - it was because she was so adorable."